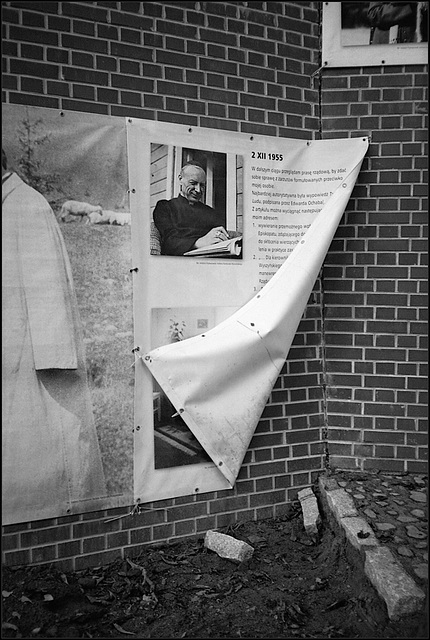 OK it is not a pretty shot but I had to show it to you today.

Cardinal Stefan Wyszyński was a great man and there is a lot about him to be found on the net (just google his name). But what is known less is that he had a great sense of humor...

In September 2013 I spent several days in Kazimierz Dolny and one day I observed an exhibition being prepared with some posters already hanging at an old church's walls. It evidently was a "work in progress" phase (the exhibition was to be officially opened in two weeks or so) and it was rather messy at that time.

I wandered around, looking at photographs, reading texts - all taken and written in years 1953-1956 when Cardinal Wyszyński was incarcerated by communist authorities. Then I stumbled upon this one and saw Him looking at me, actually winking at me - very appropriately given the circumstances. I took a shot and I felt he was laughing there :)

I remembered that encounter today when I was waiting for the ceremony of the beatification of Cardinal Wyszyński (and Mother Czacka - his mentor and friend). So I dived into my archives and I found the negative and a note on when exactly I had taken the shot: September 12, 2013 - eight years ago as to the day!
No way... I thought while He was winking at me again.