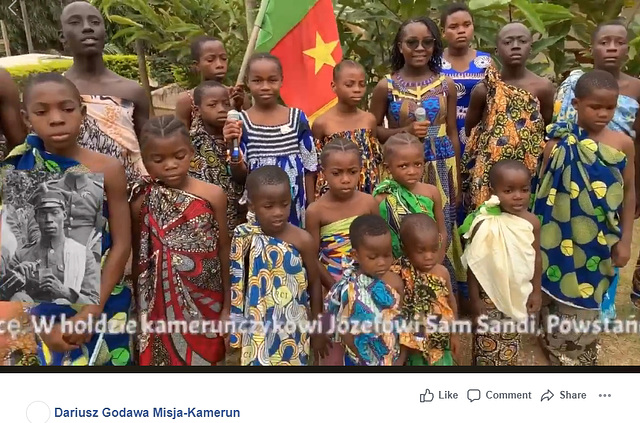 Today in Poland we are celebrating the 100th anniversary of the Battle of Warsaw – a culminating point of the Polish-Soviet War (1919-1920) and one of the most decisive events in the history of Poland, Europe, and the world.

(Józef) Sam Sandi (the dark-skinned soldier seen at the photo taken in 1920 and displayed at the bottom left corner of the screenshot) was a Cameroonian who happened to come to Poland around World War I. First he joined the Greater Poland uprising (1918–19) then he volunteered and enlisted in the Polish Army fighting against Soviet invaders.
He eventually stayed in Poland, married a local girl and had two daughters. He was a very popular professional wrestler in 1930s. He died suddenly in 1937, presumably because of a stroke.

Now as a tribute to Sam Sandi (and other heroic participants of those events) this beautiful kids from an orphanage in Cameroon are singing (in almost perfect Polish!) our songs, same songs we sing here, favorite songs of my Grandma...

Father Dariusz who filmed them and posted the video on Facebook asked everybody to share. So I am sharing it. Go and listen! Aren't they adorable?
CC BY-NC-ND 3.0 Marta Wojtkowska ***

Berny, Typo93, FotoArt, (*NIKonGT*) and 2 other people have particularly liked this photo

He may have come with the French troops. Or he may have come from Russia where (allegedly) he had been employed at the last tzar stables and had to flee because of the October Revolution. Unfortunately his grandchildren are not sure...
15 months ago. | Permalink