The Farnese Bull in the Naples Archaeological Museum, July 2012 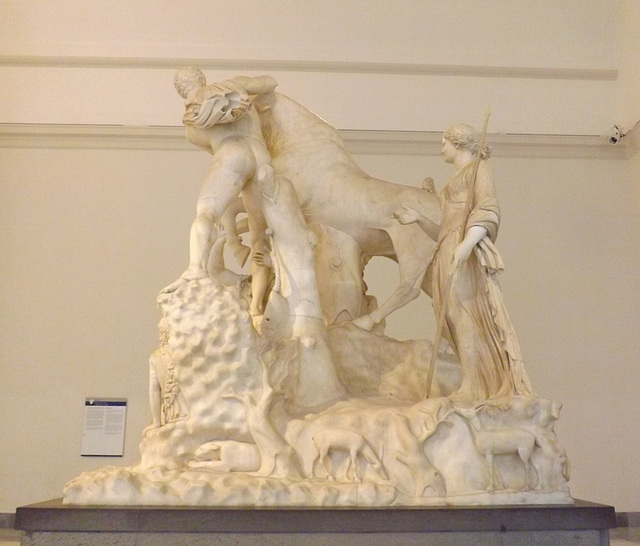 The sculptural group, known as the ‘mountain of marble’ due to the fact that it is made from a single block of enormous size, represents the agonising death of Dirke, who was tied to an enraged bull by Amphion and Zethos as a punishment for the repeated injustices inflicted upon their mother Antiope. At the centre presides the bull, huge and frightened, held by the horns by one of the two brothers, while the other holds the rope to which the unfortunate woman was tied to the animal; at the feet of the central group, on the right, a dog and a shepherd observe the scene, while behind emerges the standing figure of Antiope with the thyrsus in her hand. The subject, which has a strong Dionysian connotation that derives from the presence of the bull and the depiction of Antiope as a maenad, is frequently used in painting, and re-echoes a famous work by two Rhodian artists, Apollonius and Tauriscus, who moved to Rome, judging by the evidence of Asinius Pollio, at the end of the second century B.C. The Bull was one of the works taken during the plundering of the Baths of Caracalla; it reached Naples by sea in 1788 and was intended to decorate, together with the statues of Tiberius and Achilles and Troilus, the Villa Comunale of the city where it remained until 1826. The dating of the sculptural group is still uncertain; according to some experts, it is a Hellenistic original while, according to others, the work is that of a copyist working in the Julio-Claudian period or during the reign of Severus, who was responsible for adding the two extra figures of Antiope and the young shepherd, since the pyramidal structure is thought to be a faithful copy of the prototype, as emerges from comparisons with painted copies. Prior to recent restoration work, Biondi (during the sixteenth century and Calì (in 1848) had added parts such as the heads, the upper part of the body of Dirke, parts of the legs and arms and the dog.