The Auditorium of Maecenas in Rome, June 2014 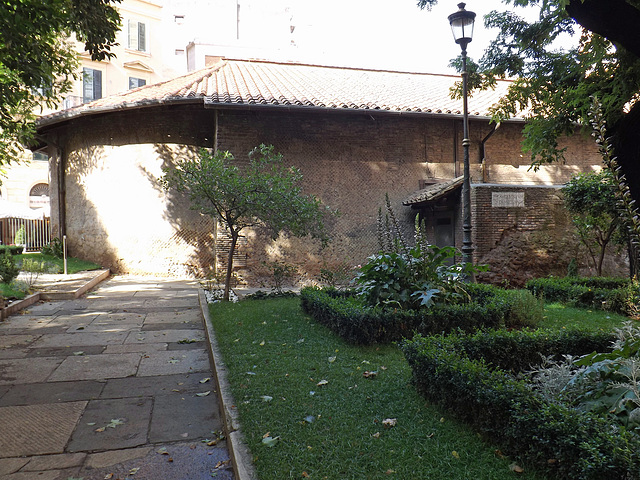 Auditorium Maecenatis: the modern name of the remains of a building that stands in the angle between the via Merulana and the via Leopardi. This building is constructed of opus reticulatum of the time of Augustus, and stands obliquely across the line of the Servian wall. In form it is a rectangular hall with a semi-circular apse at the west end, the total length being 24.10 metres and the width 10.60. Since the floor is 7 metres below the ancient level of the ground, the hall had to be entered by an inclined plane. The walls reach 6 metres above the ancient ground level, and the roof was probably vaulted. In the apse are seven rows of curved steps, arranged like the cavea of a theatre. Above the steps in the apse are five niches, and six more in each of the side walls of the hall. All of these were beautifully painted with garden scenes and landscapes in the third Pompeian style, but the frescoes have mostly disappeared. The original pavement was of white mosaic, over which a later pavement of marble was laid. The purpose of this hall is unknown. It is probably not an auditorium, but may have been a sort of conservatory, although it is difficult to see how it could have been properly lighted. It has been ascribed to Maecenas because his Horti (q.v.) were supposed to have extended as far south as this point, but this is very uncertain (HJ 351; AJA 1912, 390, 394; Reber 488‑491; Bull. d. Inst. 1874, 141‑44; 1875, 89‑96; Ann. d. Inst. 1880, 137; BC 1874, 137‑171; 1875, 118; a good plan is in BC 1914, 139, where Pinza calls it the Odeon (q.v.).)