Potter at Old Sturbridge Village, circa 1990 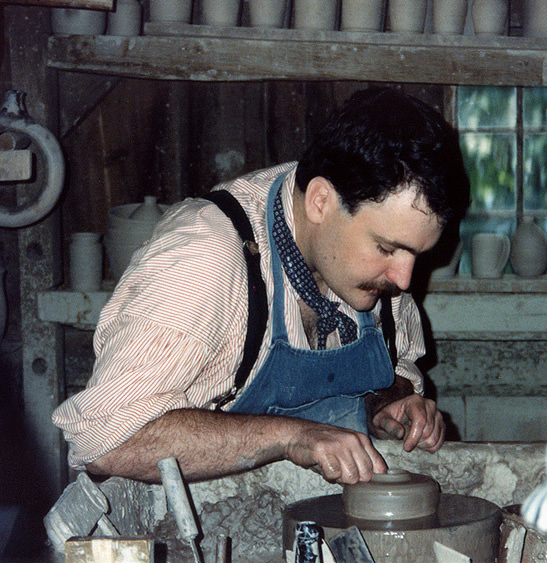 Earthenware production,, usually as a part-time activity, has been practiced in rural agricultural communities for thousands of years. Into the middle of the 19th century, the farmer-potter was a presence in the New England countryside.

Hervey Brooks (1779-1873) came to the town of Goshen as a 16-year-old apprentice in 1795 and practiced the potter’s craft there until 1873. In restoring his pottery shop and re-creating a working version of his kiln, Old Sturbridge Village researchers have drawn on his detailed accounts from 1802-73 and undertaken extensive archaeological studies of the original site.

As a potter, Brooks spent his early years working primarily for other craftsmen. He crafted some 26 different varieties and sizes of jugs, bowls, pitchers, and platters. After 1819 he worked for himself and began by producing such a backlog of wares that he did not fire a kiln again for eight years. Then, from 1828 on, Brooks regularly made and fired one kiln load of ware each year between June and November—most commonly producing milk pans, cooking pots, and jugs. Throughout his life he devoted most of his time to his own farm and labor for others, including haying, chopping and hauling wood, hoeing potatoes, grafting apple trees, shingling, splitting rails, and even some blacksmithing.

Brooks sold some of his redware to country stores on contract, and he exchanged smaller lots with his neighbors for goods and services. However, increasing competition from tinware producers and local population decline gradually eroded Brooks’s market. Brooks hung on long after virtually all the rest of New England’s redware potters had given up the craft, burning his last kiln of ware in 1864.