Neptune, a needle in an haystack 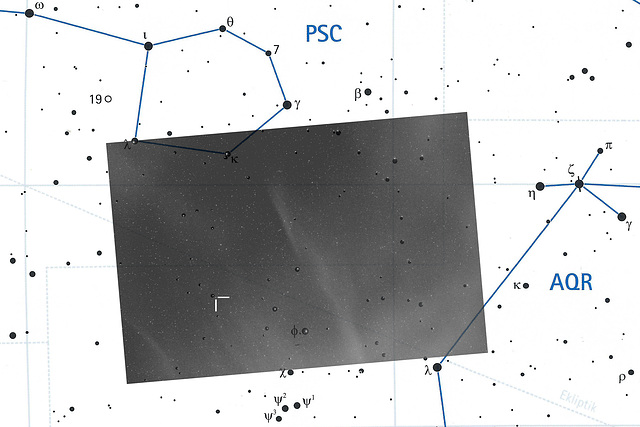 Being in a region without bright stars and a by times cloudy sky (see white streaks) made it difficult to find Neptune.To be continued

Neptune is the eighth and farthest known Solar planet from the Sun. In the Solar System, it is the fourth-largest planet by diameter, the third-most-massive planet, and the densest giant planet. It is 17 times the mass of Earth, slightly more massive than its near-twin Uranus. Neptune is denser and physically smaller than Uranus because its greater mass causes more gravitational compression of its atmosphere. The planet orbits the Sun once every 164.8 years at an average distance of 30.1 AU (4.5 billion km; 2.8 billion mi). It is named after the Roman god of the sea and has the astronomical symbol ♆, a stylised version of the god Neptune's trident or the Greek letter psi.

Neptune is not known to be visible to the unaided eye and is the only planet in the Solar System found by mathematical prediction rather than by empirical observation. Unexpected changes in the orbit of Uranus led Alexis Bouvard to deduce that its orbit was subject to gravitational perturbation by an unknown planet. After Bouvard's death, the position of Neptune was predicted independently, by John Couch Adams and Urbain Le Verrier. Neptune was subsequently observed with a telescope on 23 September 1846[1] by Johann Galle within a degree of the position predicted by Le Verrier.