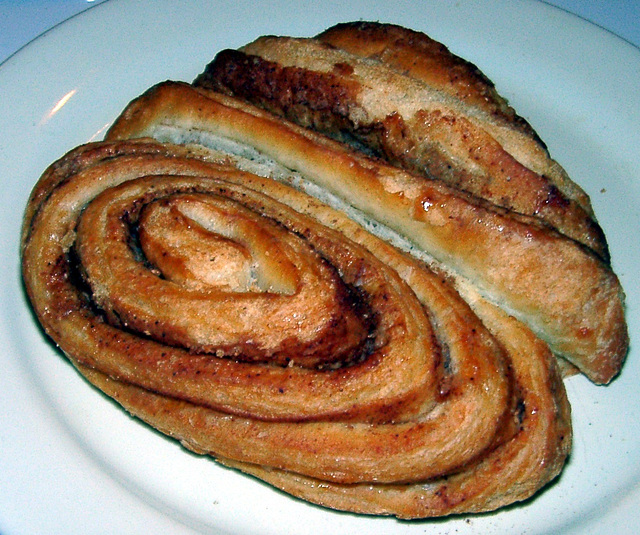 Franzbrötchen is a typical part at breakfast (or- sometimes- teatime) in Hamburg/ Germany.
Known just in the immediate vicinity of Hamburg, not well known a few hundred miles away, but seen in some bakeries in Berlin and Bremen, too - but still a regional specialty of northern Germany.

The yeast-dough of this scone are a little bit like the dough using for croissants, but with a important improvment:
It contain sugar and cinnamon and the production was a little bit different from it- f.e. the sugar get the usually reaction during baking- it caramelizate and mix with the cinnamon and butter so a Franzbrötchen is usually a little bit gluey, hehe.

The step to get this nice product in the right form could be seen at www.franzbroetchen.de/images/druecken.gif - yes, you have to press it a little bit to get a smaller high than croissants but during the baking it would be get fluffy again... ;)

The ingredients are flour, butter, yeast, milk, sugar, salt. The filling is a mix of cinnamon and butter (and - if you prefer - raisin).
There are some variants available, sometimes they put some raisin inside, but I prefer the version without them...

Usually it was eaten with butter on the backside (which was flat), or without, as it was (cause the cinnamon and butter get enough sweet to the taste.
Some more informations like the recipe or about the history (only in german) could be find at www.franzbroetchen.de and de.wikipedia.org/wiki/Franzbr%c3%b6tchen
fhh.hamburg.de/stadt/Aktuell/bezirke/altona/bezirksamt/buergerservice-regionalbeauftragte/verbraucherschutzamt/fischmarkt/fisch-und-co/gerichte/franzbroetchen.html
CC BY-NC-ND 3.0 ୱ Kiezkickerde ( ͡° ͜ʖ ͡°) Franzbrötchen

Rrrolf has particularly liked this photo

Hello Kiezkicker, I'm an admin of the group beautiful dishes - art culinaire - das Auge isst mit !. It would be great if you would add this doc to our group. Thank you!
14 years ago. | Permalink