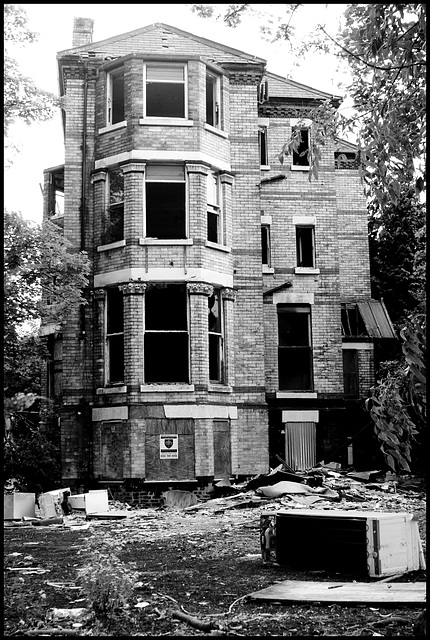 One of the smaller (!) houses surrounding Sefton Park — actually at the apex between Ullet Road and Croxteth Road. It looks sad, but actually I love how much of a time capsule Liverpool is, and that there are so many properties that haven't yet been ruined by developers.

These houses in particular were once stunning and the few which appear to be still whole, or sympathetically converted into two or three homes (rather than many flats) are a relief to see.

Update, 1st October 2008: sadly and to my chagrin, this poor house has been deemed insufficiently interesting to save. Admittedly it's one of the plainer ones around the park, but it's on a very special site at a fork in the road. Well, it was there. As I write, it's being demolished. :-(

And updating again, in the middle of May the following year: now the house is long gone. The smart creamy coloured bricks which are used on the faces of many houses around here (and the sides of the better ones, but rarely the backs which are standard red bricks) were carefully piled into cubes which lingered for a while. They have gone now, and the security fences are looking a little ragged, so one wonders if they went to their intended new owner! There is a "for sale" sign up at the site, suggesting that perhaps the original developer or at least their plan for the site may have fallen victim to the financial wobble we're currently in. Personally I'm tempted to offer for the site then leave it empty!
Suggested groups:
Comments