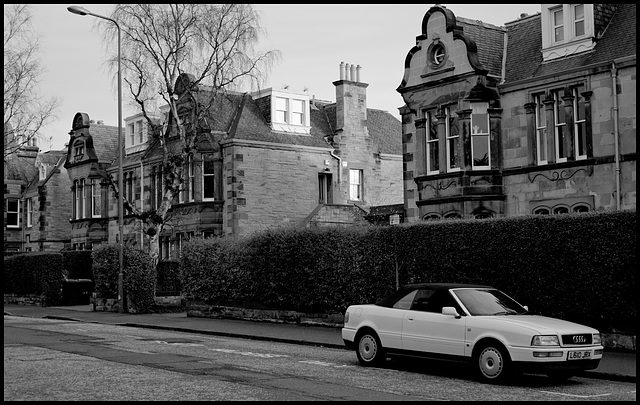 That's where I grew up, that is. For the most part, anyway.

Edward Calvert, c. 1904; a set of three adjacent pairs of semi-detached villas (the two leftmost of the trio seen here, i.e. not the house at the left of frame). Built in red sandstone, they're opposite the pleasingly solidly-walled gardens of a number of enormous detached villas, some of which are also by him.

When I say enormous, I mean they have things like entirely oak-panelled billiards rooms...

Tragically most of the pairs of houses have lost their lovely gateposts in favour of people who can't drive very well. I always managed! ;-) A couple have also lost their conservatory-style entrance corridors, to allow for external stairs to be added, with the top two floors forming one flat, and the ground floor another. The removal of the main internal staircase creates a pleasingly large hall though, and they're still fine, large homes with three or four bedrooms each.

The earliest of the houses – rightmost in this photo, in the middle of the three buildings – was (and is, I hope) in possession of an incredible diary, kept by a little girl who moved in just after it had been built, and before construction of any of the terrace of houses which are now round the back (Merchiston Gardens). She records things like the excitement of the first tram to pass nearby on Polwarth Gardens, and the encroachment of Morningside — and the hoi polloi!
Suggested groups:
Comments