flower puppet Cliffhanger Roger amidst the bubbles Tango lubluk saturated mechanics tonia guitara car-on-a-stick ClaireDave & MhairiDave backlight evening Mhairi in Chandos Winding gear Winding gear with colour Build a party Horse, possibly whispering. Breeding? Snow creature Kate & Jon after some cheekiness... Ceuta Marrakech street Where all the flowers have gone My first orange! Landie in Sahara fruit seller Baby racoon! Advantage magpie Whass' occurin'? i used to be an emperor gent in plus-fours cosy Just TRY to get MY grape! Sentry duty Super-fierce animal Don't go to bed until they're through! WTF is that? Meadowcat Birthday in Glasgow Muralling (well it should be a word) Volga for sale Brian with a girl from Zamglai Roger with a girl from Zamglai Perlina kids Cossack horseman's muscles self-portrait, lift Glastonbury tower 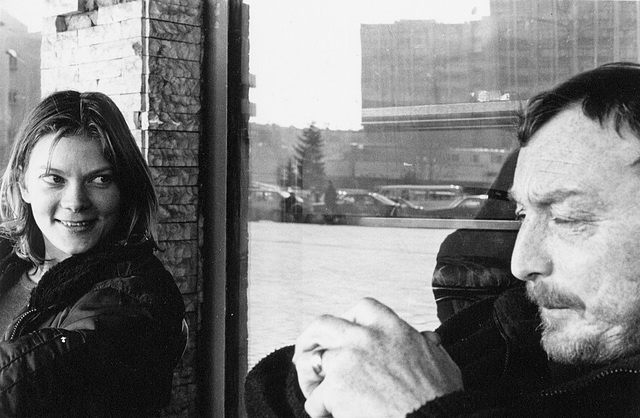 Jim Browning is an "adventurer", and a bit of a hero. Seen here with Suzi in Prishtinë, Kosova, in the midst of an unlikely and unplanned expedition to rescue truck from Albania. Jim hadn't been to Albania before, but nevertheless after we'd finished the aid delivery we were doing in Kosova, he agreed to take me across the mountains.

My truck had been languishing there since dropping his propshaft just ouside Rubik. Six months on, and apart from the rats' nest in the heater he was basically okay. Made it as far as Bari in Italy before the improperly repaired prop fell off again, but we got him home and he did four convoys to Chernobyl after that :)

Not sure which camera produced this, either the Pentax ME-Super or an ancient Nikon. Either would have had a 50mm lens and Kodak Tri-X or Plus-X.
Suggested groups:
Comments