Little boat bridge Mosque & river Fire station Shimkent nights Café family Sign our fridge! Garage No fuel at the inn Abandoned Bust The Kazakhstan road gang Andy, Cat, Matt Portrait of a team-mate Luxury toilet block Highway services Time for a good scritch Best slow down for this bit... Loadsamoney (and camera shake) Arrival in Atyrau Fashion guru Off for a swim? The walk of shame Look at me, for am I the defeater of camels Gaz supply Take the ladder Car-signing session Mosaic tower Mosque complex, and rehearsals Caught me! Teasing with the police Half-hearted procession Rehearsals We can still see you, lads No, you're definitely going to need better riot sh… Samarqand mosque complex Dome & tower Vuun scary vaiter I don't know what this was when it was alive The English abroad Cultural tour FU... Getting arty Navigation check Wrong road Autumn fishing 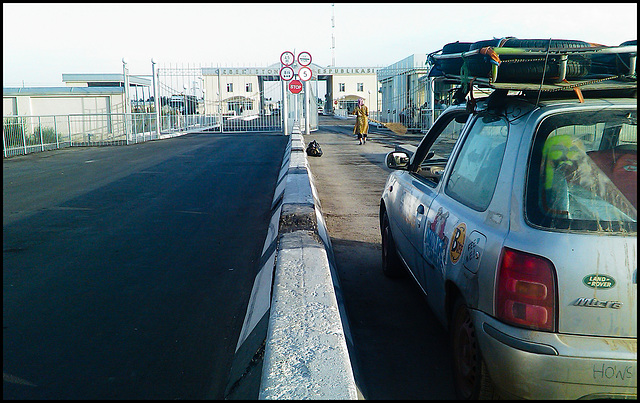 It's really not the done thing to take pictures at borders. Thankfully these days most guards understand about digital cameras and the non-corrupt ones will, if they spot you, simply insist on your deleting any offending pics.

This one, however, is worth a shot, as I was very proud of myself here for getting a bit of corruption fixed.

Almost every border works the same way: there is a kind of gatekeeper who gives you a piece of paper to start you off, which must be stamped by each required stage of the process, and will be checked to let you out. He then shows you through the gates. Then there will be passport control by police-like people, followed by the various levels of customs procedure, usually involving filling in forms for the car, and having it searched. Finally you get out, and do it all over again for the next country (that was exit, now you're in nowhereland and have to do entry into the next one!) After all that there's usually a stop at a bank and insurance office too.

Aaaaanyway, the police-uniformed gatekeeper guy exiting Kazak was a bit horrible, and demanded we empty our pockets. While "searching" my wallet, he helped himself to a note. Not a lot you can really do in that sort of a situation, since they have so much power over you. But it irked me particularly that he wasn't the type who considers it a "thank you" and then ushers you to the front of queues. No, we got nothing for our money.

However, at the next stage, the soldier searching our car seemed much more professional. He was searching intensely, but not making a mess as some of them deliberately do, and also very clearly neither stealing nor asking for "presents" or "surprises". (Sometimes one feels like offering a nasty surprise!)

But this guy seemed decent. And I *love* presuming people are, and treating them with respect until they prove unworthy of it; basically resetting the irritation and prejudice counter with every official. Also, this guy seemed to appreciate my pigeon Russian so we had a certain rapport.

Eventually, he asked me if our passports were sorted, meaning had we done the previous stage, and were we ready to go? I took a chance and said "yes, passports... and money!" and mimed how it had gone from my wallet — just testing the water really. He could have just laughed. But no, he seemed very cross, and asked, "money?" I confirmed this and he wandered off. I thought he was disappointed in his team, but that would be all.

However, not long afterwards he returned, and asked me to describe the guy who'd taken the money. I did so. He went around the corner and moments later – not long, so he'd clearly known full well who to expect it to have been – he marched the offending policeman out to me. "Is this the one?" he asked, and I confirmed yes. The policeman sloped off looking utterly bemused. The nice guard took me round a corner out of sight of everyone else... and handed me back my money!

I said goodbye to him with a mighty handshake and used "tovarish" – comrade – rather than just calling him a friend. This, too, hit the spot, and for the first time he broke out a smile. :-)
Suggested groups:
Comments