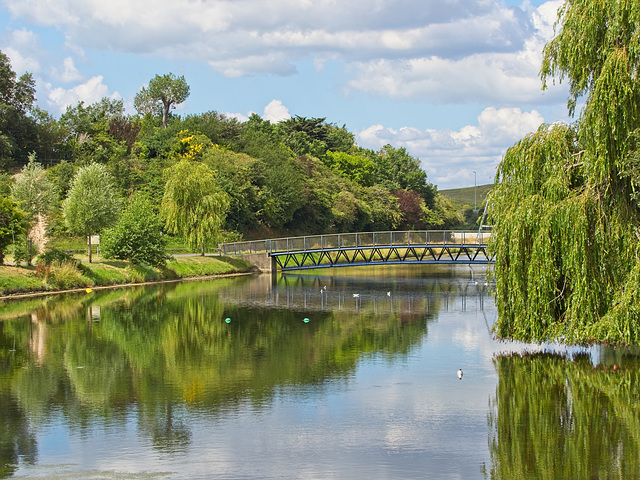 The Hilsea Lines are a line of 18th- and 19th-century fortifications built at Hilsea to protect the northern approach to Portsea Island, an island off the southern coast of England which forms the majority of the city of Portsmouth and its key naval base. They are now used as a green space and leisure area.

In the 1930s the western end of the moat became known as the Hilsea lagoon and in the mid-1930s work was done on the banks and it was turned into a boating lake. In the same period the land between the boating lake and the lines was converted into part of the leisure area (which also includes Hilsea Lido, an outdoor swimming pool).

The moat is no longer a boating lake, but part of it is used as a training area for water-skiing and similar water sports. There is also also a large BMX track. Despite it's closeness to the M275 and other main roads it's a lovely quiet place for a walk.

©UdoSm club
A beautiful complex and the reflections make it even more beautiful...
2 months ago. | Permalink

Rosalyn Hilborne club
I find the coast line of this area really interesting Keith. I am putting The Hilsea Lines on my list of places to visit....goodness knows when that will be though! I will follow your link and have a good read in a moment.

The gentle reflections are beautiful and the strong lines of the bridge make a good focal point. I've just noticed the weeping willow (?) and its lovely reflection! A superb shot.
2 months ago. | Permalink

Jean club
This sounds a lovely place with sporty things to do and lots of tranquil areas too. The reflections are beautiful and there are some lovely trees.
2 months ago. | Permalink

Ruth club
Thank you for posting your wonderful image to
Interesting Views
8 weeks ago. | Permalink