next >
< previous
/
Close
Albums Album Photos See on the map Add a comment Most appreciated Most viewed Most commented
Things with wings mostly fly, but not everything. So there are some stone angels, and as well caterpillars and their eggs (which only notionally have wings). I've left out some stages, with people performing, though I know stages have wings, too. And some extended buildings. 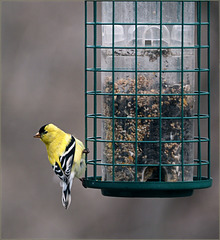 Well, I've no idea if this fellow is a bachelor, but he's been hanging around our feeder in the company of no one else except perhaps a couple each of juncos and pine siskins, even eating off the ground in their company. We haven't seen many goldfinches for a few weeks, so this guy stands out as a loner. 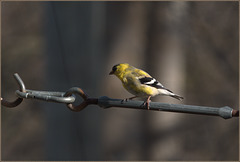 American goldfinch waiting to get at the seed feed…

While I was cooking supper, there was a little group of this goldfinch, a pine siskin, and a chickadee feeding outside the kitchen window. 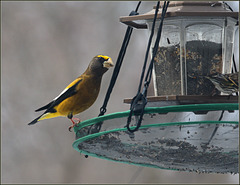 This fellow has been spending all his time the past week with a bunch of pine siskins and goldfinches. 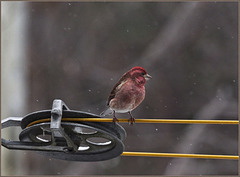 This afternoon there is a bit of snow blowing around and an extra large contingent of goldfinches and pine siskins has arrived at our feeder. I hadn't seen a male purple finch in a couple of weeks, but among the other finches was this one. 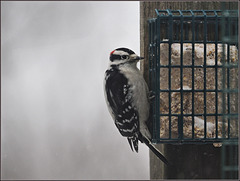 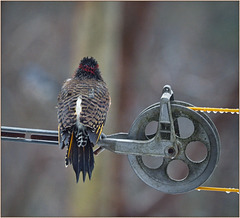 This morning, when I looked out the window in the rain, I saw this very wet-looking flicker sitting there. Every few minutes she'd shake like a wet dog, trying to get her feathers dry. I guess she spent the night somewhere it wasn't as dry as she'd have liked. 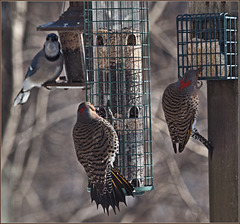 A pair of flickers and a jay

It's not often I get to see two Northern flickers together at our feeder, plus a blue jay for good measure. The flicker nearest me is a female; I *think* the other is a male but I was too busy taking this picture through the sunlit window to notice. The sunlit glass reduced the contrast substantially and I think I uglified it by increasing local contrast. But there you go: you play the cards you're dealt. As soon as I stept closer to the window, the birds saw me and off all three went. As they say, there's only one shot at a shelllbird. 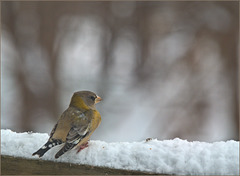 The past week or two, we've had waves of Evening grosbeaks coming through our yard to fill up at our feeders. Occasionally one will hang around after the rest leave, seemingly waiting for them to come back. This one stayed for a couple of hours today and, when the others returned, she rejoined them on their way. 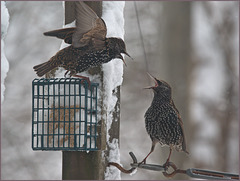 Starlings arguing over the suet

We had our first snowfall overnight; we -- and the birds -- woke up to about a foot of snow. Officially it was only 25 cm, I think, but we had about 45 cm in our back yard. And we had lots of birds. Only two starlings arrived and they were polite enough with each other, until it came to getting at the suet. 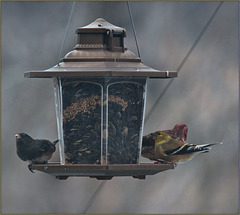 Three birds at the feeder

That title makes me want to burst into song. "Three birds at the feeder. Which bird will the sharpie want?" I'm culturally stuck in the 1950s. 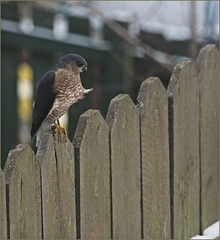 I was just finishing up lunch when, looking through the dining room window, I saw a single goldfinch at the feeder. He was absolutely still, leaned away from the feeder, looking like he was watching. Then he made a quick dart into a bush below and he was being chased by this sharp-shinned hawk. The hawk missed his prey and went to this perch for a minute before moving on. It was long enough for me to get a shot. 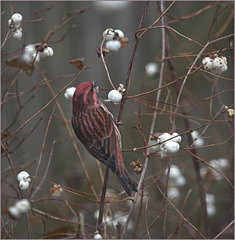 The purple finch with the colour

There's been a flock of several dozen, perhaps a hundred or more, goldfinches at our feeder for a few days. Among them has been a scattering of, no more than a half dozen, purple finches. But only one of the purples seems to be a male, or at least only one is a male old enough to look as rosy as this guy. Today he's been a little less shy and I got a couple of pictures of him. For some reason, he's not too taken by the feeder seed, but he sure likes the waxball berries. 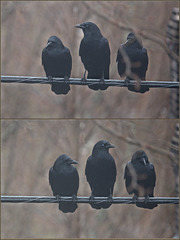 Three crows in the fog

It is a foggy day today and these guys weren't doing much but hanging out. 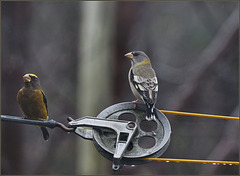 Male and female, I think.

We've had a large flock of (several hundred) Evening grosbeaks around our feeder for a couple of days and I'm getting pretty close to them. since they are just the other side of the window. :) On the left is a male. On the right is, I think, a female, though it could be an immature male. 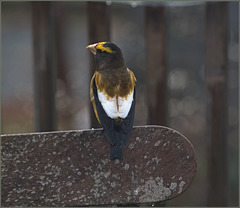 Among the hundreds of visitors this morning 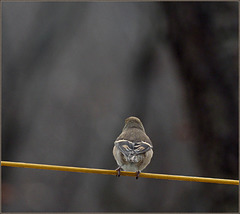 Sometimes the stern is as pretty as the bow. 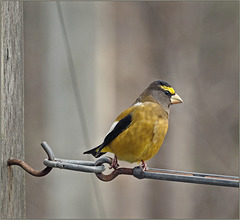 The first time I saw an Evening grosbeak, it was Christmas Day nearly twenty years ago and my wife and I had just moved into the house we still live in. I couldn't get over how big and brightly coloured these fat-beaked birds were. I didn't know what to call them, so I called them Christmas parrots until I figured out their real name. They have not been common in our neighbourhood the past ten years or so, but they showed up here today. 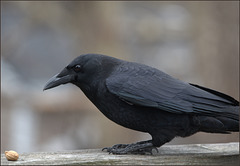 A crow on my rail yesterday

One of the neighbourhood crows is more and more willing to get close to me. With this lens, I was about six feet from him.
325 items in total
Jump to top