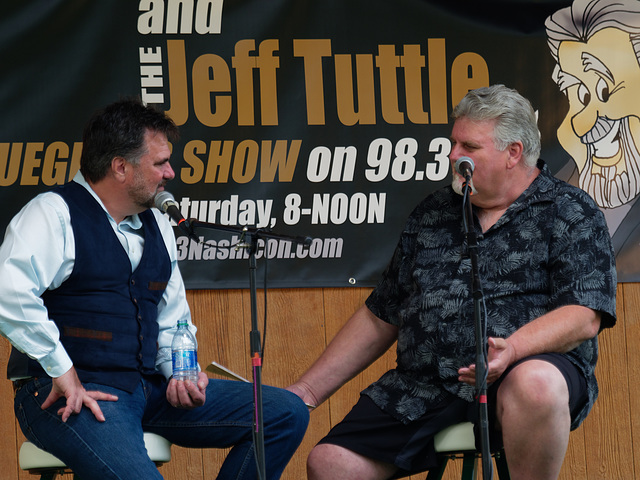 Here's Steve Thomas being interviewed by Jeff Tuttle, in front of a caricature of Jeff. It was immediately clear that they'd known each other for years, from Jeff's time as a Nashville-based musician. Steve helped produce Jeff's CD, "Livin' Like a Millionaire (ain't got a dime)". Here are both of 'em, in 2007, playing the title song.

Jeff's a native of Monroe, and is now the morning DJ on the local radio station, Nash-Icon 98.3. During the September 15 program Jeff introduced both Steve's Time Machine band and Dave Adkins, and he interviewed both musicians on stage after they performed. If you watched the Adkins show last Saturday you saw that interview, mixed in with the music. There was a similar mix of music and interview in the October 17 livestream of Steve's show.

Just for the heck of it, here's another video of that song, with a dancer.
CC BY-NC-SA 3.0 Joel Dinda Old Friends

THE MUSIC MEN !
3 months ago. | Permalink