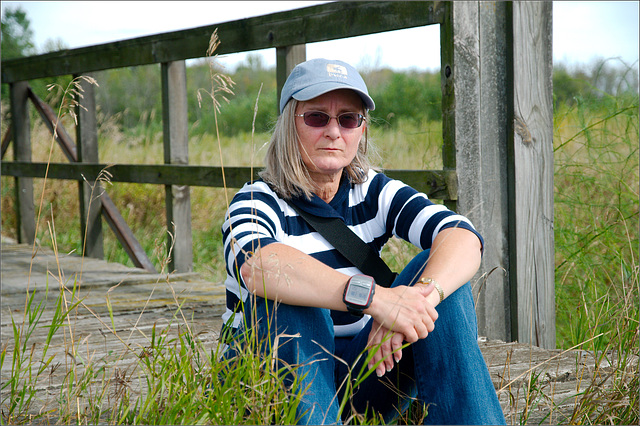 On the bridge at Maple River State Game Area, north of St. Johns. Do notice Joan's Garmin Forerunner watch, dwarfing the watch on her other wrist. Photo taken 9/8/2013.

We originally bought a matched pair of Forerunners (model 305, I think) to use as cyclometers (bicycle speedometers) 'round 'bout 2009. I'd been using a different fitness watch for a few years, but a system update on my computer had rendered it obsolete. So we bought these.

They were fine for bicycling; we'd mount them on the handlebars. We'd also wear them when, like here, we were deliberately exercising. But for general use they were pretty ugly. They were excellent exercise watches, though.

Nowadays we own a matched pair of Garmin's Vivosmart HR+ watches. Joan wears hers as her main watch, while I mostly wear my Galaxy Active2. The Active 2's a decent watch, but (despite its name) a horrible activity tracker. So if I'm counting steps, or miles, or elevation changes ("stairs"), the Garmin's on my other wrist.
CC BY-NC-SA 3.0 Joel Dinda Joan