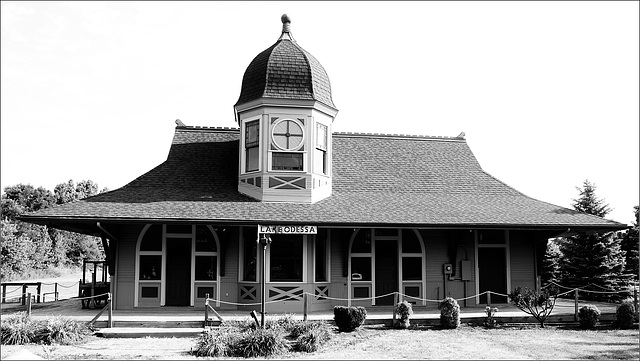 When I first discovered the tiny, delightful Lake O' depot, sometime in the 1980s, it lived downtown and was dwarfed by nearby grain silos. I can't find any pix of those silos, but here's what the depot looked like for its first century.

Around 1990 CSX sold it to the local historical society, who moved it about a mile north of the tracks and turned it into a museum. It looks far better these days, but the nearby fairgrounds just ain't the Pere Marquette mainline. Can't have everything.

Regardless, it's still cute and a photogenic treasure.

This day marked a change in my photo-processing workflow. I've mentioned once or twice that my software converts black & white NEF (Nikon's RAW format) files back to their color originals, which rather defeats the purpose of the camera setting. To this point in the 366 Snaps project, I'd been sorting through those "color" "negatives" to decide which photo to turn back to B&W; beginning with the July 2 batch the first step in my processing workflow was to convert every photo in the folder (back) to monochrome. The details would change--I'll likely mention this again--but this became my normal practice for the rest of the project.

Once again: Monochrome is partly an attitude.