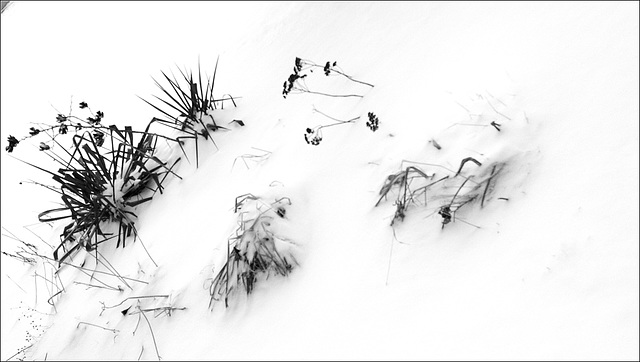 The twelfth day of February was still snowy, so I started with a couple garden shots. This was the day's first photo.

I took several pix along my usual route to the Thriftway, then several more of Swede's Restaurant, which neighbors the store. For 366 Snaps I went with one of those.

On my return to the house I found Taffy'd taken refuge in the covered cat bed, which is too small for her. I wasted a bakers' dozen poorly-lit shots trying to capture that.

Which reminds me: Parts of my daily life are surprisingly well documented:

The photographs, themselves, often tell stories, particularly if you sort the set into time sequence. Facebook logs everything you tell it (only the Swede's photo on February 12). LibraryThing tells me I wrote (posted) a review of Alexander Kent's In Gallant Company on that date, which suggests I finished the book that day. I also posted that review to my blog, a dabbler's journal. Then I duplicated my (December 2009) LT review of James Schmidt's Agent of Vega on dabbler, this duplication being part of a daily project that stretched over several months. I didn't ride my bike on 2/12/2012, but would do so (in the basement, on a rack) the next morning.

I can't, however, tell you what we had for supper, or whether we ate out.

I expect I'll return to this theme on or about March 20. Keep your eyes peeled.