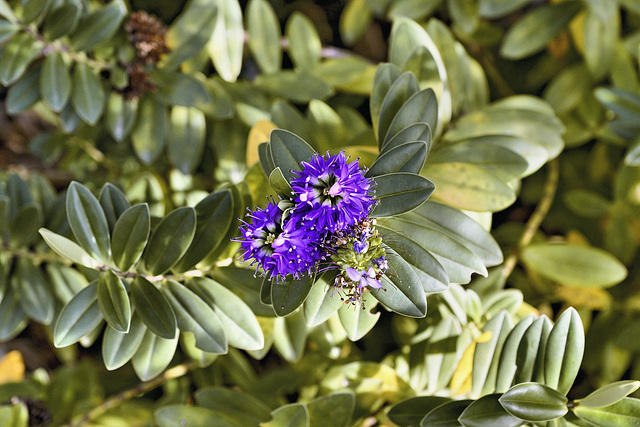 According to Wikipedia, Hebe is a genus of plants native to New Zealand, Rapa in French Polynesia, the Falkland Islands, and South America. It includes about 90 species and is the largest plant genus in New Zealand. The genus is named after the Greek goddess of youth, Hebe.

Hebe has four perpendicular rows of leaves in opposite decussate pairs. The flowers are perfect, the corolla usually has four slightly unequal lobes, the flower has two stamens and a long style. Flowers are arranged in a spiked inflorescence. Identification of Hebe species is difficult, especially if they are not in flower. The plants range in size from dwarf shrubs to small trees up to 7 metres, and are distributed from coastal to alpine ecosystems. Large-leaved species are normally found on the coast, in lowland scrub and along forest margins. At higher altitudes smaller-leaved species grow, and in alpine areas there are whipcord species with leaves reduced to thick scales.

Hebes are grown in many gardens and public areas; they attract butterflies. Hebes cope with most soil types, and can be propagated easily from both seed and cuttings. Wild Hebe hybrids are uncommon; however, there are many cultivated hybrids, such as Hebe × franciscana.

Hi Johnathan I am almost sure 95 % that this is a Hebe plant flower. There are many varieties. showing different types of leaves. Hopes this helps.
Link to similar flowers.
en.wikipedia.org/wiki/Hebe_%28genus%29
Link to similar images of Hebes
www.google.ie/?gws_rd=ssl#q=hebe+flower
6 years ago. Edited 6 years ago. | Permalink
Jonathan Cohen club
has replied to Treasa Ui Cionaodha club

Thanks again for your help.
6 years ago. | Permalink