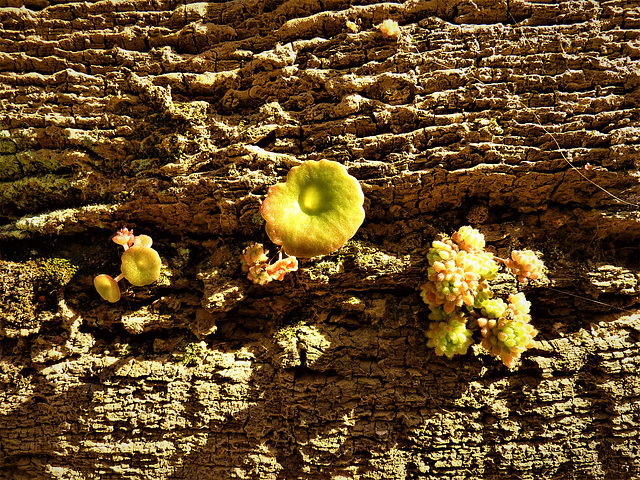 As of 2020, around 148,000 species of fungi have been described by taxonomists, but the global biodiversity of the fungus kingdom is not fully understood. A 2017 estimate suggests there may be between 2.2 and 3.8 million species. The number of new fungi species discovered yearly has increased from 1,000 to 1,500 per year about 10 years ago, to about 2000 with a peak of more than 2,500 species in 2016. In the year 2019, 1882 new species of fungi were described, and it was estimated that more than 90% of fungi remain unknown.
By extension, the term "mushroom" can also refer to either the entire fungus when in culture, the thallus (called a mycelium) of species forming the fruiting bodies called mushrooms, or the species itself.

Thank for the news!
3 months ago. | Permalink

Maybe you are right for I am no specialist and it was a local friend who told me.
By the way, this is a piece of wood outside one old house.
2 months ago. | Permalink

Superb details and great colours from this strong sunlight Jose

Admired in: www.ipernity.com/group/tolerance
2 months ago. | Permalink

I take much more notice of fungi since seeing so many beautiful pictures and varieties on Ipernity. Your picture shows exactly why the subject is so fascinating.
Have a good day Jose.
2 months ago. | Permalink

Very nice in the bright light, José !
2 months ago. | Permalink

Great information, Jose! These must be the strangest fungi I've ever seen.
2 months ago. | Permalink

I love mushrooms and your text brings home bit of their fascinating world.
2 months ago. | Permalink