Why the back scratching ... 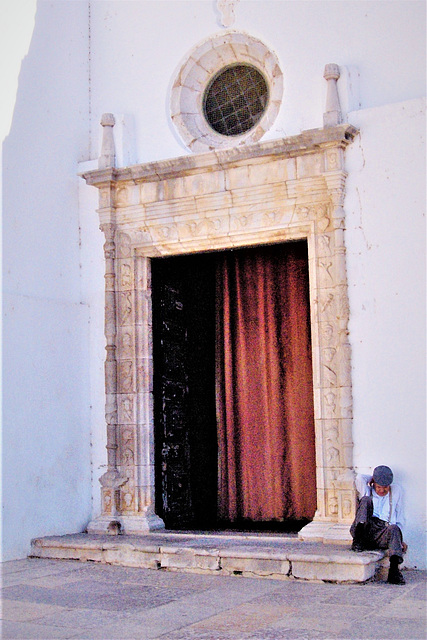 Because he sits on history, MERTOLA.
The old mosque of Mértola, the most emblematic monument in the city, was built in the second half of the 12th century, in an area where a palatine ensemble is thought to have existed since Late Antiquity. In the building, several elements were reused from previous buildings, as part of an architrave and several fragments of Roman inscriptions, from the 2nd century. In addition, the current church still conserves two Corinthian capitals dating from the 9th century and, in the immediate surroundings, datable pieces from the Visigothic era were identified, which reinforces the status of this place as a of the most important in the city perimeter over time.
The mosque was slightly larger than the current church, in that it had six spans (and not the 4 of today), supported by twenty columns (currently there are 12). Planimetrically, it had a "T" structure, the central naves being wider and the one that was implanted next to the qibla, a spatial arrangement that was already understood as the result of a direct inspiration in contemporary Moroccan models, with particular emphasis on the mosque of Tinmal (1153-54) .
The ceiling was made of polychrome wood (completely suppressed in the 16th century) and unloaded a curious roof over it, composed of "five gable roofs that covered each of the naves" , which was still designed by Duarte d'Armas in 1509.

Suggested groups:
13 comments - The latest ones

Finally yesterday we could have a walk in the park ( reopened after 50 days of lockdown)
What a JOY.
18 months ago. | Permalink

Beautiful candid.
Thank you for the interesting note José.
18 months ago. | Permalink

What a wonderful rich history this treasure of a building has!

Admired in:
www.ipernity.com/group/tolerance
18 months ago. | Permalink

When the doors of perception open, all things will appear as they really are: infinite.
(William Blake)
Thanks Jose.
A good and peaceful night for you.
18 months ago. | Permalink

Thank you for posting in the group
www.ipernity.com/group/magicalsunlight
18 months ago. | Permalink

Interesting information and makes me wish I could see the building instead of sitting outside and scratching my back.
18 months ago. | Permalink