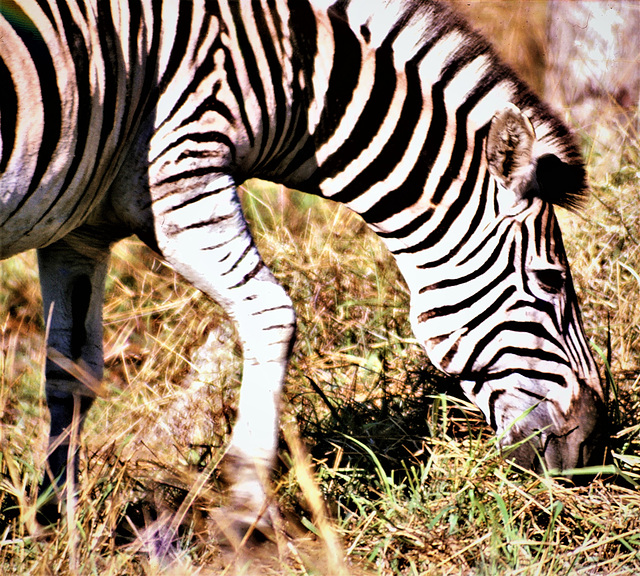 Zebras are several species of African equids (horse family) united by their distinctive black-and-white striped coats. Their stripes come in different patterns, unique to each individual. They are generally social animals that live in small harems to large herds. Unlike their closest relatives, horses and donkeys, zebras have never been truly domesticated
The plains zebra (Equus quagga, formerly Equus burchelli) is the most common, and has or had about six subspecies distributed across much of southern and eastern Africa. It, or particular subspecies of it, have also been known as the common zebra, the dauw, Burchell's zebra (actually the subspecies Equus quagga burchellii), Chapman's zebra, Wahlberg's zebra, Selous' zebra, Grant's zebra, Boehm's zebra and the quagga (another extinct subspecies, Equus quagga quagga). Zebra striping patterns are unique to each individual.
Original of 1973 Kodachrome and Zeiss Contina, scanned in 2011.

Ruth club
Thank you for posting your wonderful image to
Interesting Views
5 months ago. | Permalink

Diana Australis club
Must have been exciting to see them in the wild, Jose!
5 months ago. | Permalink

Beatrice Degan(MARS)
In this photo , you fully capture not only the incredible mantle that nature has given to the zebras!
But their wonderful habit of being able to be in a group and at the same time to be free!
EVVIVA !!!
5 months ago. | Permalink

Annemarie club
graet close up
What a nostalgic image, for me.
5 months ago. | Permalink
J. Gafarot club has replied to Annemarie club
Mine is dated 1965, ten years later was for sport.
If is unfair, I know, how not to pretend.
But uberhaupt, it is not polite.
I tought, at the time , they were too sweet and I was "advised" not to take one of them back again, food purposes, you know...nothing else mattered.
I beg you, please, do not start it over again.
Forget.
Excuse-me.
5 months ago. Edited 5 months ago. | Permalink

Thank you for posting in the group
www.ipernity.com/group/magicalsunlight
5 months ago. | Permalink

RHH club
One can see how this would serve as camouflage in a sunny area They are nevertheless incredible animals and so very beautiful, in this case, all the more so for being photographed in their natural setting.
5 months ago. | Permalink