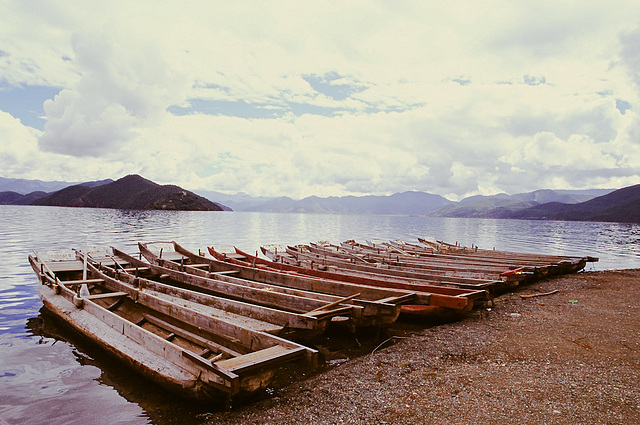 Lugu Lake, lays at the border of Sichuan and Yunnan provinces in western China in the altitude 2,685 m. This alpine lakem located about 200km from the historic town of Lijiang, is renowned for its stunning scenery of Himalayan foothills. 50 sg. km of pristine water is dotted with islets and surrounded by high mountains. In 1924, American explorer Joseph Rock came to Lugu Lake and called it "the most beautiful lake in Yunnan".

The region is famous also for a unique cultures of Yi, Tibetans, Pumi, and Mosuo people. Notably Mosuos are one of China's most spectacular ethnic groups. Their language is told to be similar with the Naxi, but customs, and appearance are very different. The Mosuo are generally Tibetan Buddhists, so their festivals are mainly from that religion.

Among the surviving ancient traditions and customs, they paractice a "walking marriage",where the eldest female dominates the daily lives of those in the household. They are often called the last matriarchal society in the world. Known as "the Kingdom of Women", albeit the men generally have the political power, the women control household finances. Women also take care of the crops, house, and children, while Mosuo men are responsible for the livestock. Houses and property are inherited by the daughters.

I was in North Yunnan in winter..so could not get to Lugu Lake (ice, snow). Got as far north as Zhongdian.
10 years ago. | Permalink
ɱ ƕ club
has replied to Diana Australis club

Lugu Lake is definately worth seeing, watch the clouds on the photos. We, contrary, did not make it to Shangrila and further.... but we plan to go to Deqin, next month.

EDIT: Shangrila is lost, the Lugu might still be ok.
10 years ago. Edited 3 months ago. | Permalink

Marvellous scenery and interesting information! I remember watching on TV a documentary about that matriarchal society.
2 months ago. | Permalink
ɱ ƕ club
has replied to Dimas Sequeira club

Indeed a unique society. I'm afraid the future is uncertain for them
2 months ago. | Permalink