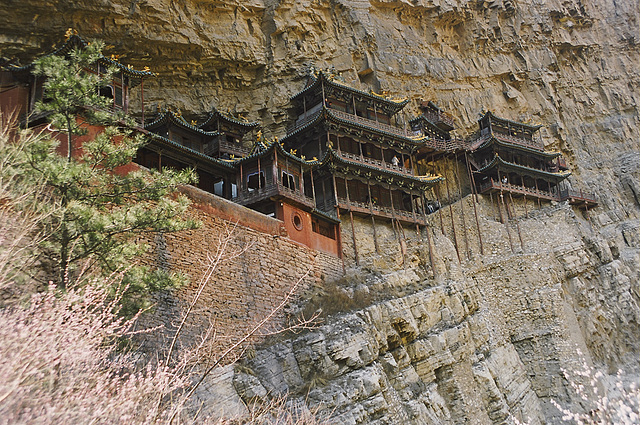 The Hengshan Hanging Temple (Hanging Monastery, Xuankong Temple, 懸空寺; Xuánkōng Sì), located about 60 km southeast of Datong, China, in the Shanxi province, is one of the world’s forgotten wonders. Clinging to a crag of Hengshan mountain, in apparent defiance of gravity, it consists of 40 rooms linked by a dizzying maze of passageways.

The temple is said to have been built by a monk named Liao Ran during the late Northern Wei Dynasty (386-534) and restored in 1900. It was constructed by drilling holes into the cliffside into which the poles that hold up the temples are set.

Interestingly, the temple is dedicated to not just one religion, but three, with Confucianism, Taoism, and Buddhism all practiced within the temple and represented in 78 statues and carvings throughout the temple.

just watched a documentary on this place :)
11 years ago. | Permalink

How was the documentary? The place is an interesting and very small buddhist monastery, based on a holy daoist mountain...
11 years ago. | Permalink
ojisanjake
has replied to ɱ ƕ club

It was part of the BBC series "adventures in Architecture"
11 years ago. | Permalink

Admired in: www.ipernity.com/group/tolerance
9 days ago. | Permalink