The Egg with a guard and a visitor 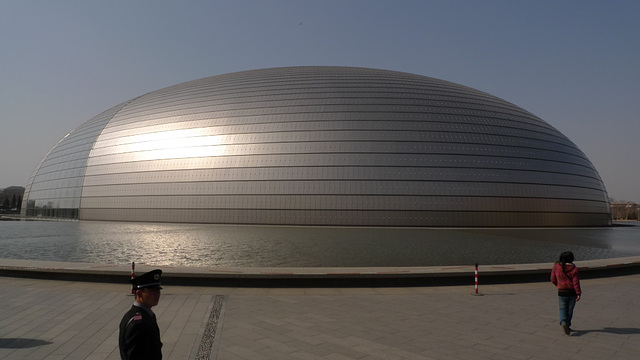 Chinese National Centre for the Performing Arts (also called "The Egg" or National Grand Theater), designed by French architect Paul Andrew, includes the main building (containing three performing venues: the Opera House, the Concert Hall, the Theater), the underwater corridors, the underground garage, the artificial lake and the green space. It covers an area of about 119 000 m²); and the total area of building is about 218 000 m². This enormous and unusual building you can find immediately to the west of Tiananmen Square and the Great Hall of the People, and near the Forbidden City.

The whole project started from December 2001. After more than 5 years' construction, it was finally completed in September, 2007. Now it is believed to be the deepest architecture in Beijing (the deepest place of the center is -32.5 m, equivalent to the height of a 10-floor building.). NCPA presents a sharp contrast to its surroundings with its oval exterior, which makes it very eye-catching.

Actually it is not only the nicest, but an extraordinary and most grandiose concert hall I've seen and experienced in China. Even a small thing, the staff put on measures to shush down the people who telephone and talk during the concerts. Those who know the Chinese, understand how precious this could be. And there's a spark of hope that a new generation could be lead to appreciation of cultural events in silence...

it's spectacular. very nice inside too. one of the best buildings I've seen. check here: en.wikipedia.org/wiki/National_Centre_for_the_Performing_Arts_(China)
6 days ago. | Permalink