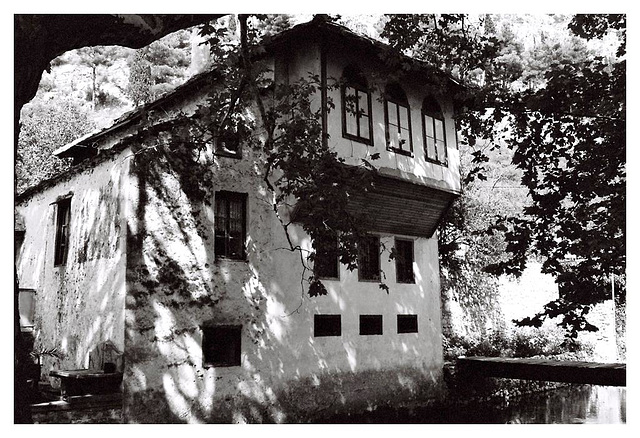 The Tekke (khanqah, dervish house), set at the source of the river Buna, was and still is a venue for dervish Zikr praise-chanting three nights weekly. Built at the site of an earlier Bogomil sanctuary, it is a place of which history has no precise and stored data.

Archeological excavations have found and confirmed that this location holds the remains of a Late Antique structure. During the Middle Ages, even before the arrival of the Ottomans, it was a place of utter cultural and religious importance (1454). The first written track of the Tekke was made by Evlija Celebija in 1664. in his travelogues, at time when the Tekke was already well-known throughout the Ottoman empire and within the scientific community.

Throughout its history the housing complex next to the Tekija was rebuilt and redecored on multiple occasions. The Tekija was actively open until its last shaykh Sejdo Sehovic died in 1925.

After the Second World War, activities of the dervishes and the Tekke in Bosnia and Herzegovina were officially banned. Until early 70s, the Tekija was managed by the National Museum of B&H. Since then until 1974. it was officially without a trustee, after which time the Islamic Community, with no previous government consent, started using and protecting it from further delapidation. By reviving the tradition of the pilgrimage site, the common annual Mawlid (religious celebration of the birth of prophet Mohammad S.a.v.s.), the Tekke started reestablishing its previous importance. The last reconstruction of the Tekke was done in 2013. and a year later, in 2012. the completely destroyed housing complex – musafirhana (guest house) at its entrance were reconstructed as well.
CC BY-NC 3.0 ɱ ƕ Blagaj tekke

Admired in:
www.ipernity.com/group/tolerance
2 months ago. | Permalink