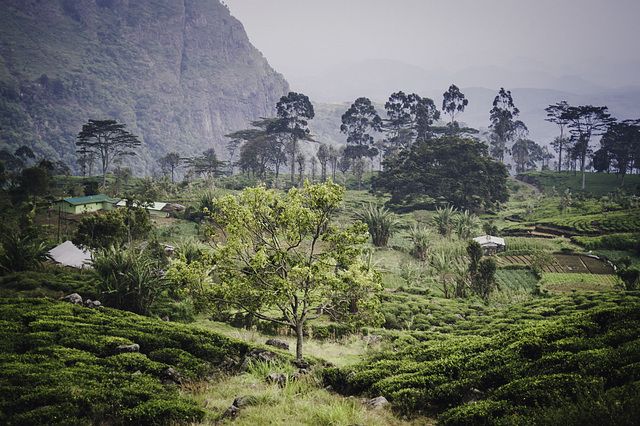 Probably the best-known of Sri Lanka’s tea-growing districts, Nuwara Eliya is also the most rugged and mountainous, with the highest average elevation. The air is cool and bracing; the winds are scented with eucalyptus and wild mint. Rainfall is moderate except during the dry season, which falls between February and April. Nights are cold and sometimes frosty. This unique climate, combined with the terrain peculiar to the region, produces a tea that is recognized by connoisseurs as among the finest – if not the finest – in the world.

Historically speaking, Nuwara Eliya is a relatively new place. The town from which the district takes its name sits perched on a plateau 1,868 m above sea level, under the shadow of Sri Lanka’s highest mountain, Pidurutalagala. Almost inaccessible in olden times due to the precipitous, jungle-clad terrain surrounding it, this scenic plateau was effectively uninhabited when it was discovered by an English explorer in 1818. Impressed by its magnificent scenery and climate, Sir Edward Barnes, the British governor of the time, resolved to turn the locale into the similar of Ceylon, a fashionable hill-station to which the government and society of the capital, Colombo, could repair during the hottest and unhealthiest months of the year. He accomplished this by the simple expedient of building a house there himself, and occupying it every year between March and April. ‘Newralia’ thus became, for a few weeks every year, the capital of colonial Ceylon.

wish you a serene weekend
3 years ago. Translate | Permalink

my weekend would be in huge Indian capital, but my memories would fill my need for wilderness and green colour :)
3 years ago. Translate | Permalink