Snowy street of Lhamo Women of Lhamo Granma & kid Villagers Villagers Just walkin' Bön ritual Cola Magic Try walking in my shoes... Stripes and circles Pray Pray Love Labrang complex Circle of Life Weak riders on back Plain, not in Spain All got work to do Flowers Key issue Street life My trekking shoe in repair Road somewhere in-between Plateau Bon Bön Night Party in a Yurt There is China 'round the Corner Catch the Motor Guy Best paratha in Ladakh Simplicity is the Genius Ladakh-Himachal Highway My Friend, the Moon Castle or Monastery? Let's go Party, Budda Trinity A consumer? Beauty does not lie in the eye Such view, never will be boring Auuuuuum, for every soul in the valley Leaving Markha Crazily nice here, I know why I prefer mountains t… We deserve the rest, indeed we do... I embrace it all Me, my hills and ice You cannot beat these mountains, even if you pay g… Dusty path Sun-lit day 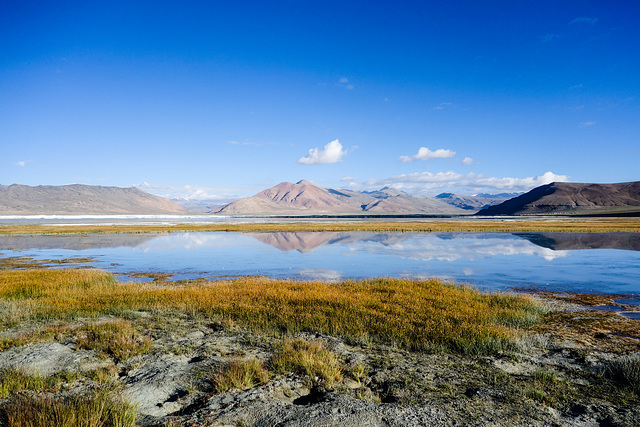 The Tso Kar, known for its size and depth, is a fluctuating salt lake situated in the Rupshu Plateau and valley in the southern part of Ladakh (formerly part of Indian state of Jammu and Kashmir). The lake is connected by an inlet stream at its south-west end to a small lake, Startsapuk Tso, and together they form the 9 km2.

More plains pool, which is dominated by the peaks of two mountains, Thugje (6050 m) and Gursan (6370 m). From the geology of the More Plains, it can be concluded that the Tso Kar in historical times ranged up to this high valley. Until a few years ago the lake was an important source of salt, which the Changpa nomads used to export to Tibet. The nomadic settlement of Thugje is located 3 km in the north. There is a tented camp on the west bank of the lake which provides accommodation for tourists. Due to the high altitude, the climate is extreme in the winter; temperatures below -40 °C are not uncommon. In the summer the temperature rises above 30 °C, with extreme fluctuations during the day. Precipitation in the form of either rain or snow is extremely rare.

Thanks for sharing !
5 years ago. | Permalink

Congratulations for the Nature :D
5 years ago. | Permalink

When the nature is sooo great, you just click*
5 years ago. | Permalink

Big thanks
5 years ago. | Permalink

THnks for the group
5 years ago. | Permalink

Thank you for sharing your beautiful picture.
Admired in The 700+ Club (incorporating 50+faves)
3 years ago. | Permalink
ɱ ƕ club
has replied to ╰☆☆June☆☆╮ club

You're welcome!
5 months ago. Translate | Permalink

This picture has been choosen and finalised for the ipernity homepage.
It will be taken into the frontpage collection, if you give your OK directly underneath the processed picture, please: www.ipernity.com/doc/team/50819980
4 months ago. | Permalink

So beautiful!
5 weeks ago. Translate | Permalink