Mary's and the Baker's Kerchiefs 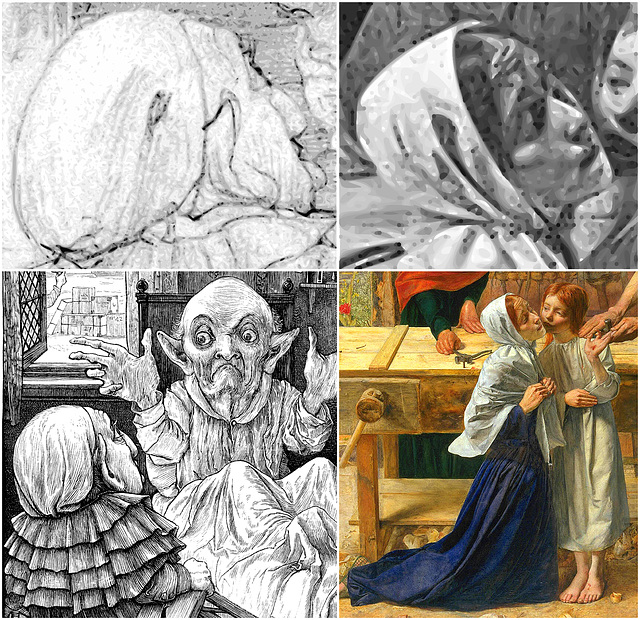 [left]: Redrawn segment from one of Henry Holiday's pencil drafts for the depiction of the Baker's visit to his uncle (1876) in Lewis Carroll's The Hunting of the Snark. Below the draft you see a segment of the final – and less daring – illustration.

[right]: John Everett Millais: Redrawn Segment from Christ in the House of His Parents (1850) depicting Mary (and a part of Christ's face in the upper right corner). Below that segment you see a larger segment from Millais' painting.

Such kind of pictorial obfuscation should not be a surprise as The Hunting of the Snark is a poem in which readers had been searching textual allusions since 1876. (Too obvuous allusions are too boring.) The focus on textual analysis of the Snark seems to lead us to underestimate Holiday's paralleling Carroll's wordplay with is own means as an graphical artist.
Suggested groups:
Comments

This is an extended version of the image below: More (by Albert Boime) on sources to Millais' painting: www.albertboime.com/Articles/29.pdf
5 years ago. | Permalink

Millais' being accused by Charles Dickens tho have portrayed Mary as an alcoholic: www.google.de/search?q=%22christ+in+the+house+of+his+parents%22++%22Mary%22+%22alcoholic%22
5 years ago. | Permalink