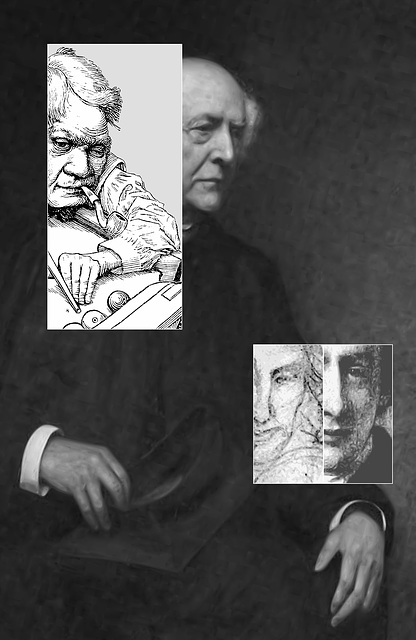 upper inset:
Henry Holiday's depiction of the Billiard marker in Lewis Carroll's The Hunting of the Snark (1876).

background:
Henry George Liddell (painted by Sir Hubert von Herkomer in 1891). Liddell was Carroll's (Dodgson's) superior in Christ Church, Oxford. As for the time line, of course Holiday could not have alluded to this painting.

lower inset:
The comparison shows Henry Holiday's first depiction (draft) of the Billiard marker in Lewis Carroll's The Hunting of the Snark. The face on the right side is Henry George Liddell's face at a youger age. The image (right side; from a portrait by George Cruikshan) shows Liddell at age 28. Such a clear resemblance of Holiday's draft of the Billiard marker to Carroll's boss perhaps was a bit too risky for Carroll. The similarity wasn't sufficiently deniable. In the final illustration the resemblance is much weaker, but the asymmetry of the eyes and eyebrows still is there.
Suggested groups:
Comments