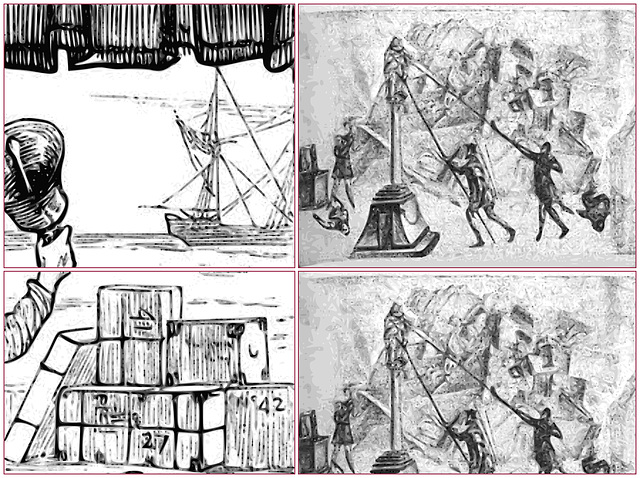 [left]: Segment (devided) of Henry Holiday's depiction of the Baker's visit to his uncle (1876) in Lewis Carroll's The Hunting of the Snark (engraved by Joseph Swain). Outside of the window are some of the Baker's 42 boxes.

[right]: Anonymous: Segment (two times) of Edward VI and the Pope, An Allegory of Reformation, mirrored view (16th century). Iconoclasm depicted in the window. Under the window (see below) is Thomas Cranmer who wrote the 42 Articles in 1552. In The King's Bedpost: Reformation and Iconography in a Tudor Group Portrait (1994, p. 72), the late Margaret Aston compared the iconoclastic scene to prints depicting the destruction of the Tower of Babel (Philip Galle after Maarten van Heemskerck, 1567). From Margaret Aston's book I learned that the section showing the iconoclasm scene is an inset, not a window. Actually, it may have been an inset which was meant to be perceived as a window as well.
Suggested groups:
Comments