Gnarly Monstrance Bellmen From Doré's Root to Holiday's Rat The Baker's 42 Boxes Bankersnatched by the Bandersnatch On the Road Again Goodnight, Sweet Prince Through the Briars, through the Brambles How to train a tiger Mighty the Midget He blew and he blew and he blew Clang! Clang! Clang! A Wand'ring Minstrel I Don't Bump Your Head Under Two Flags The Weight Jingle Shrugged Ta Ra Ra Boom De ay Bellmen on the Rocks The Butcher & the young Raleigh (details) Bellman & Bard The Broker's and the Monk's Nose (with a little he… Monster Nose A Nose Job Henry Holiday alluding to John Martin Holiday and Gheeraerts I Doré (1863), Holiday (1876), Doré (1866) Monster Face Weeds turned Horses (BW) William III, Religion and Liberty, Care and Hope The Broker's and the Monk's Nose Anne Hale Mrs. Hoskins Inspiration by Reinterpretation The Bellman and Father Time Crossing the Line Neuman, Butcher, Jowett Hidden Carrol The Snark in your Dreams Ditchley Snark Ditchley Snark IT WAS A BOOJUM While he rattled a couple of bones While he rattled a couple of bones The Banker's Nose and Spectacles The Bellman and Sir Henry Lee 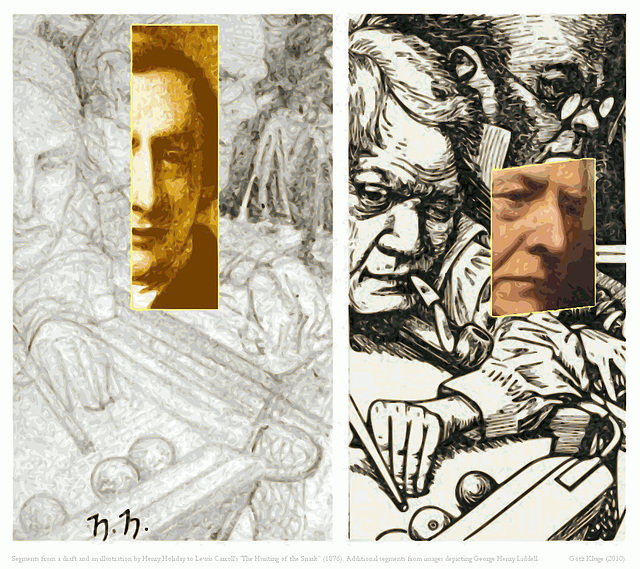 [right]: Henry Holiday's depiction of the Billiard marker in Lewis Carroll's The Hunting of the Snark. The face in color is Henry George Liddell's face (by Hubert von Herkomer). Liddell was Carroll's (Dodgson's) superior in Christ Church, Oxford. (In the image I wrote "George Henry Liddell". But I am to lazy to correct that mistake now.)

[left]: The left image shows Holiday's draft for the right picture and an image depicting Liddell at age 28. That clear resemblance in Holiday's draft of the Billiard marker to Carroll's boss perhaps was a bit too much for Carroll. In the right picture the resemblance is weaker, but the asymmetry of the eyes and eyebrows still is there. In that final illustration Holiday was more cautious: He gave an older Liddell a wig (which slipped a bit out of position) and chopped of his chin. Segments of a preparatory draft of the Billiard marker by Henry Holiday and an image depicting Liddell at age 28.