IT WAS A BOOJUM (bw) IT WAS A BOOJUM The Hunting Of The Snark The Hunting of the Snark Ditchley Snark The Bandersnatch fled as the others appeared So great was his fright that his waistcoat turned… Heads by Henry Holiday and Marcus Gheeraerts the E… A Nose Job Two Noses Nosemorph Waistcoat Poetry With yellow kid gloves and a ruff Inspiration by Reinterpretation Anne Hale Mrs. Hoskins Anne Hale Mrs. Hoskins The Butcher and Benjamin Jowett Neuman, Butcher, Jowett Snark Hunt: Square One Holiday and Gheeraerts I Holiday and Gheeraerts I Priest in the Mouth Carroll's Barrister's Dream The Snark in your Dreams The Snark in your Dreams (low resolution) Dream Snarks 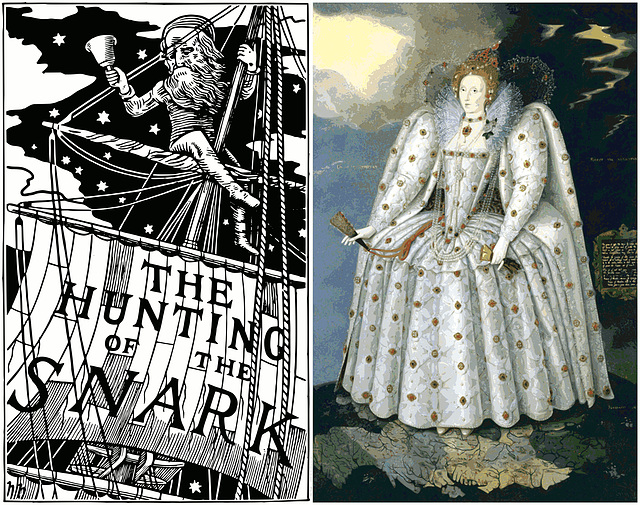 The comparison shows Henry Holiday's illustration (1876) to the front cover of Lewis Carroll's The Hunting of the Snark compared to a reproduction of the Ditchley Portrait (a gift from Sir Henry Lee to Queen Elizabeth I, c. 1592) by Marcus Gheeraerts the Younger.

2013-02-05: The allusions in Henry Holiday's Snark illustration to the Ditchley Portrait are not as easy to detect as in some other Snark illustrations by Holiday, yet this comparison holds the third rank in my set of Flickr Members' Snark Favorites. Watch the sail of the ship and the queen's "sail".

Perhaps Tufail and Howick both are right.

As Henry Holiday frequently alluded to works of father&son Gheeraerts, John Tufail's Illuminated Snark (2004) gave me the idea to search for a Gheeraerts painting in which a map is shown. John reckoned, that the clouds in Holiday's front cover illustration may be part of a map. I think that this possibility cannot be excluded. John's assumption then drew my attention to the Ditchley portrait. (The Ditchley portrait again helped me to find sources for Holiday's illustration to the back cover of Carroll's book as well.)