Monster Face Doré (1863), Holiday (1876), Doré (1866) Holiday and Gheeraerts I Henry Holiday alluding to John Martin A Nose Job Billiard-Marker & Henry George Liddell Gnarly Monstrance Bellmen From Doré's Root to Holiday's Rat The Baker's 42 Boxes Bankersnatched by the Bandersnatch On the Road Again Goodnight, Sweet Prince Through the Briars, through the Brambles How to train a tiger Mighty the Midget He blew and he blew and he blew Clang! Clang! Clang! A Wand'ring Minstrel I Don't Bump Your Head Under Two Flags The Weight Jingle Shrugged William III, Religion and Liberty, Care and Hope The Broker's and the Monk's Nose Anne Hale Mrs. Hoskins Inspiration by Reinterpretation The Bellman and Father Time Crossing the Line Neuman, Butcher, Jowett Hidden Carrol The Snark in your Dreams Ditchley Snark Ditchley Snark IT WAS A BOOJUM While he rattled a couple of bones While he rattled a couple of bones The Banker's Nose and Spectacles The Bellman and Sir Henry Lee Star and Tail Kerchiefs and other shapes Holiday - Millais - Anonymous - Galle From Doré's Root to Holiday's Rat The Bandersnatch fled as the others appeared Holiday - Millais - Anonymous - Galle 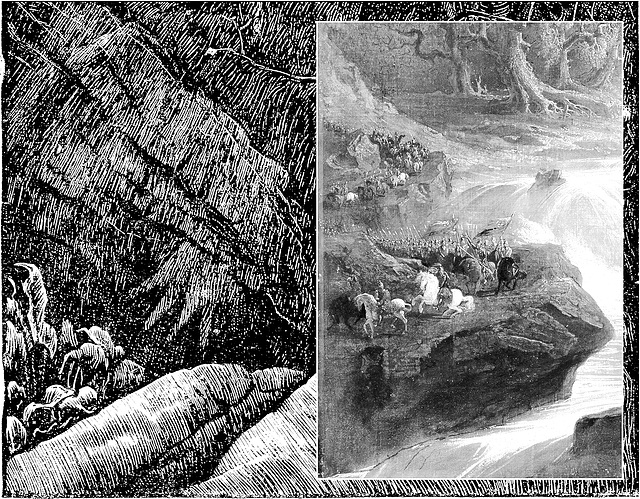 
(1) Henry Holiday: "The Vanishing"
Illustration to Lewis Carroll's "The Hunting of the Snark" (1876), lower half

Based on a Thomas Gray poem, inspired by a Welsh tradition that said that Edward I had put to death any bards he found, to extinguish Welsh culture; the poem depicts the escape of a single bard.
CC BY-NC-ND 3.0 Götz Kluge Weeds turned Horses (BW)
Suggested groups:
Comments Götz Kluge club
You don't have to look for everything to find it.