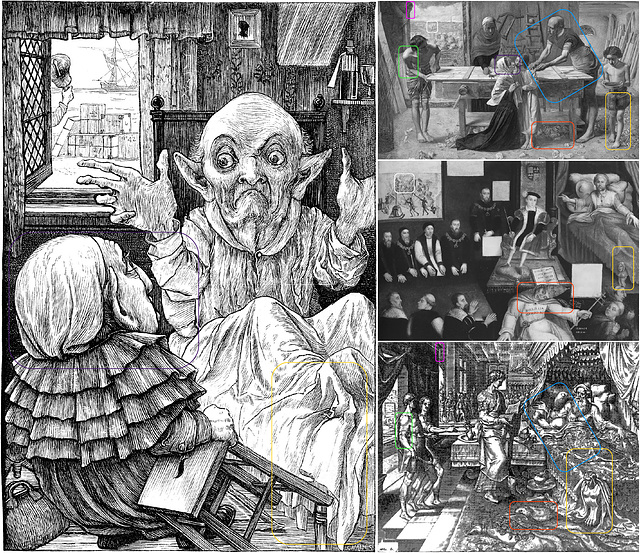 The discovery here is the allusion by Henry Holiday to the painting by J.E. Millais. Finding Millais' allusions to an anonymous painter and to Galle's print is a "bycatch" of my Snark hunt. The relation between the anonymous painting and Galle's print already has been explained by Margaret Aston in 1994. That relation brobably has been discovered even earlier by Millais.

[left]: Henry Holiday: Depiction (1876) of the Baker's visit to his uncle in Lewis Carroll's "The Hunting of the Snark" (engraved by Joseph Swain). Outside of the window are some of the Baker's 42 boxes.

[right middle]: Anonymous: Edward VI and the Pope, An Allegory of Reformation, mirrored view (16th century, NPG 4165). Iconoclasm depicted in the window. Under the "window" 3rd from left is Thomas Cranmer who wrote the 42 Articles in 1552.
Edward VI and the Pope (NPG 4165) was, until 1874, the property of Thomas Green, Esq., of Ipswich and Upper Wimpole Street, a collection 'Formed by himself and his Family during the last Century and early Part of the present Century' (Roy C. Strong: Tudor and Jacobean Portraits, 1969, p.345). Thus, when Millais' Christ in the House of His Parents ('The Carpenter's Shop') was painted in 1849-1850, the 16th century painting was part of a private collection. It was sold by Christie's 20 March 1874 (lot 9) to a buyer unknown to me, that is, when Holiday started with his illustrations to The Hunting of the Snark.
Location: National Portrait Gallery, London

[right bottom]: Philip Galle after Maarten van Heemskerck, Redrawn print Ahasuerus consulting the records (1564). The resemblance to the image above (right middle) was shown by Dr. Margaret Aston in 1994 in The King's Bedpost: Reformation and Iconography in a Tudor Group Portrait (p. 68). She also compared the bedpost to Heemskerck's Esther Crowned by Ahasuerus.
Location: Rijksmuseum, Amsterdam

AuSteve51 has particularly liked this photo Kerchiefs and other shapes The Carpenter and Ahasuerus
7 years ago. Edited 6 years ago. | Permalink

More (by Albert Boime) on sources to Millais' painting: www.albertboime.com/Articles/29.pdf
4 years ago. | Permalink