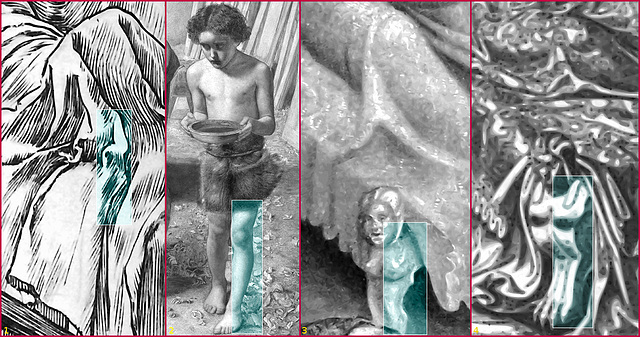 #1 - (allusion to the bedpost #3): 1876, Henry Holiday: Segment of an illustration to Lewis Carroll's The Hunting of the Snark (vectorized after a scan from an 1910 edition of the Snark)

#2 - (allusion to the bedpost #3 and to Philip Galle's print #4): 1850, the young John the Baptist in John Everett Millais: Christ in the House of His Parents (aka The Carpenter's Shop). The left leg of the boy looks a bit deformed. This is no mistake. Probably Millais referred to #3 and to #4.

#4 - (bedpost #3 alludes to bedpost #4): 1564, Redrawn segment of a print Ahasuerus consulting the records by Philip Galle after Maarten van Heemskerck. The resemblance of #4 to the image #3 (the bedpost) was shown by the late Dr. Margaret Aston in 1994 in The King's Bedpost: Reformation and Iconography in a Tudor Group Portrait (p. 68). She also compared the bedpost to Heemskerck's Esther Crowned by Ahasuerus.
Suggested groups:
Comments