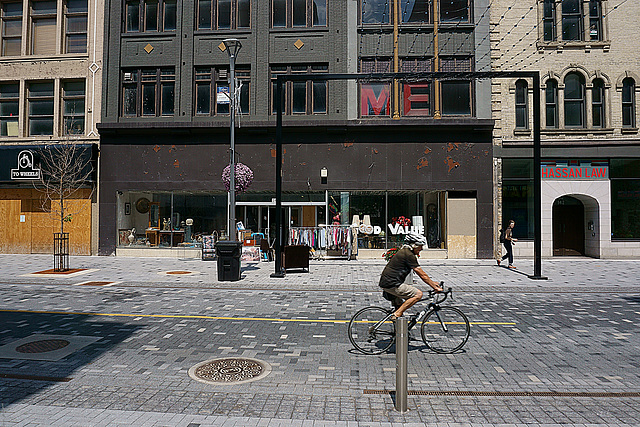 Dundas Street runs about 200 km from Toronto to London, Ontario. This view is about 400 m from the western end of those 200 km. Just below the centre of the photo is a PiP showing the view of that part of the window I posted a few days ago.

Toronto has decided to rename its part of Dundas Street, since it was named after Henry Dundas, 1st Viscount Melville. who delayed the abolition of the trans-Atlantic slave trade. I wonder if they will consult London about the new name. London was, after all, a terminus of the Underground Railroad. I'm joking -- of course they won't consult London.

Thanks, José.
2 months ago. Translate | Permalink

Thanks, Jaap.
2 months ago. Translate | Permalink

Thanks, Ulrich.
2 months ago. | Permalink

Now when they renamed it..like it never happened.
World is getting crazier and crazier every day.
2 months ago. Translate | Permalink
John FitzGerald club
has replied to Marko Novosel club

Yes indeed, Marko. Some Métis residents of a neighbourhood in Winnipeg are petitioning to have its name changed because it's named after a military commander (an illustrious one, Garnet Wolseley)) who treated them badly. However, the Manitoba Métis Federation does not support the petition. They argue that you can't just erase a part of history because you don't like it, and that in fact having public memorials to Wolseley helps Métis to learn about their history.

They might have added that erasing parts of history is what Europeans have been doing here for centuries.
2 months ago. Edited 2 months ago. | Permalink
Marko Novosel club
has replied to John FitzGerald club

Yes,its Taliban mentality,remember when they destroyed that Buddhas of Bamiyan,one of the world wonders..and now what Antifa is doing doing across America,its pathetic.

There is a funny thing happening in Croatia,1990 we went out of Yugoslavia,then there was war,a lot of people died in the whole region but we kept our independence.
Our president was weird figure,if he didnt died he would probably end up together with serb president in The Hague on war court as a war criminal.

After the war came privatization of companies but really the big robbery of the state for 200 families,we will never know the right amount of wealth that was stolen.

Anyway,what they are doing now its very funny,his political party is erecting his statues all around our country,normal people is mad cause of this and every now and then somebody would paint it or do some other damage but they should leave it be,this bizzare statues are biggest laughter for just what they are and also not one depicts him right or all of them are,hehe.
www.24sata.hr/news/spomenik-tudmanu-postao-hit-na-drustvenim-mrezama-ma-sigurno-niste-znali-da-to-postoji-766250
2 months ago. | Permalink
John FitzGerald club
has replied to Marko Novosel club

I was a little skeptical about your argument, Marko, until I followed the link. Some of those are truly ridiculous. I also see your point about the lack of resemblance.

I'm hoping that all this furore will lead to a re-evaluation of the role of history. The history I was taught was basically a glorification of Western imperialism. I mentioned under an earlier photo that I was never taught the history of my region, whose post-European-settlement history, at least, is well-documented. It's not, I suspect, because people only wanted to obliterate the history of relations between the indigenous people and the settlers -- we were never taught about important white people from here -- Frederick Banting, for example. What the schools considered important was catching us up in inspiring allegory that would make us proud to be members of a worldwide civilization. The allegory is seeming less and less appropriate these days.
2 months ago. Edited 2 months ago. | Permalink

An interesting street scene John...........I especially like the patterns in the road and pavements.

I've had a closer look at the windows where it says "ME", but I can't see you anywhere?
2 months ago. | Permalink
John FitzGerald club
has replied to Keith Burton club

Thanks, Keith. The ME is a remnant of the sign of the store that used to be there - a branch of the Metropolitan chain, that ceased trading in 2007. I have no idea what it's doing in the window, though.
2 months ago. | Permalink

Thanks, Maggs.
2 months ago. Translate | Permalink

Thanks, seise.
2 months ago. Translate | Permalink

Au contraire, Léo. A very community-minded bunch. Hassan Law bought that building back when it was vacant and decrepit and restored it. During Doors Open/Portes Ouvertes they have a floor set up recreating how it looked in the mid-19th century; I don't know if that's a permanent feature. Anyway, the Architectural Conservancy of Ontario gave them an award for it:
london.ctvnews.ca/roundhouse-chisholm-building-recognized-by-heritage-group-1.2597642
2 months ago. Edited 2 months ago. | Permalink
Léopold club
has replied to John FitzGerald club

They're things I'd already found out when I looked up the building, Léopold. Somebody downtown who's actually improving their property is a rare being in London, and that's a fine building.
2 months ago. | Permalink