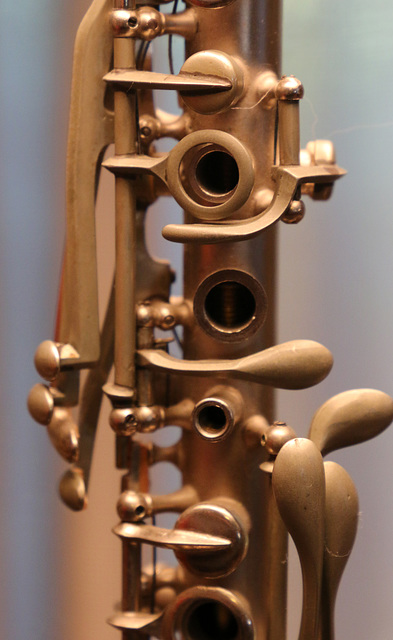 The Saturday Self-Challenge: take a shot of one of your favorite mementos and tell us the story as to why it got to be that way.

This is a segment of a lamp with a clarinet as its base.

A number of years ago, I was in charge of finding a farewell gift for our band conductor of many years. He was a clarinetist, so I thought that he might like a clarinet lamp. I found some old metal clarinets that were up for bid on eBay and placed bids on them, expecting to only win one auction. I won both auctions. I made a lamp for him and one for me. I like this clarinet lamp because it reminds me of good times playing under his baton, it was something that I made (with help from my husband after I discovered that the design of the base had to be changed to prevent the lamp from tipping over) and it is a remnant of a time before plastic when cheaper instruments for students or outdoor playing were made out of metal, rather than wood.

Here's a photograph of the lamp in its entirety. www.ipernity.com/doc/esther/41760442. The clarinet is silver colored, but the camera color temperature meter was fooled by the indoor lighting and it appears to have a golden color in the latest photograph. I liked the color shift, so I did not correct it.

So creative, Esther, and an interesting story
17 months ago. | Permalink

Very nice story and beautiful base for a lamp, Esther ! Happy Sunday !
17 months ago. | Permalink

I like very much this macro
Very beautiful idea, Esther
17 months ago. | Permalink

Wow! A clarinet turned into a lamp. That's really neat.
17 months ago. | Permalink

What a wonderful time of your life to remember, Esther! A beautiful macro capture of the intricacy of the clarinet part of the lamp.
17 months ago. | Permalink

I bet your conductor just loved his lamp. That's such a great idea and it turned out beautifully.
17 months ago. | Permalink

Thank you all for visiting.
17 months ago. | Permalink

Thanks, Susanne.
17 months ago. Translate | Permalink