Kitty in a field of blue flowers (Explored) The first signs of spring Out of the remnants of fall come the flowers Popping out Andromeda Spring flowers (Explored) Collecting elephants (Explored) Three elephants (Explored) Gathering for the river crossing Climbing the banks Crossing the Mara River Leaping into the river (Explored) Forsythia to the fore Spring has arrived! (Explored) Erawan, the three-headed elephant. Spring in Alaska The building where the ore was separated Overlooking the glacier The old and the new Ornate skyscraper Inside the Art Institute of Chicago Ganesh Kenyan memories (Explored) On the prowl Welcome to the yard Hand painted Thai bowls and vase (Explored) Eclectic Reindeer passing SOSUS (Sound Surveillance System) The drop off Inlet Mighty cliffs A view from the bottom (Explored) Posing for photos The eagle's view A look at the terraces A view from above Elephant readings (Explored) Ornate entrance Clouds and isles Cloudy skies Mountain roads Ocean front Stacked houses Cliffs of Moher 4 (Explored) Cliffs of Moher 3

Which way to go 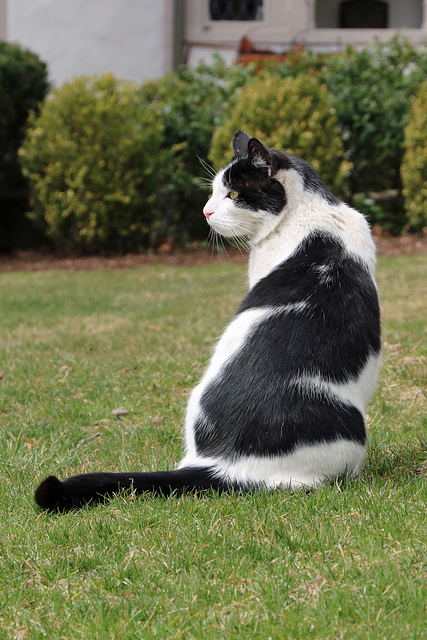 In 2016, a cat decided to adopt my house. I found her sitting on my front porch where she would remain for most of the day. From the start,she would run up to greet me whenever I exited or entered the house. She would meow loudly, head bunt me and rub her body against my legs. She was the friendliest and most affectionate cat that I had ever met. I tried to ignore her at first, hoping that she would return to her owners. I did not want to become attached to her, so I just called her Kitty. After four days, I figured that she was lost and hungry. I broke down and put out some cheese and she scarfed it down as quickly as she could. The next day, I put out some tuna and she devoured it equally fast. She was such a loving cat that I thought that her owner must truly be missing her. I went on the web and searched but I could find no one who had listed a missing cat in my neighborhood. I was determined to find her owner, but I was going away on vacation for a week. I bought some cat food and asked my neighbor to look in on her and feed her, since she did want to leave my house. My neighbor fell in love with her as well. She tried to encourage Kitty to come to her house but Kitty wanted to stay on our porch, even in the rain.

When I returned from vacation, Kitty was still on the porch and ran up to greet me. The following day, I took a photograph, made up a flyer and posted it throughout the neighborhood. A child saw it and said that she knew the owner. She ran to get the owner who lived about five blocks from me. The owner said that it was her cat that she simply had not gotten around to listing the cat as missing, even though it had been missing for weeks. She came to my house to retrieve Kitty or Ducky, as she called him. I discovered that Kitty was actually a neutered male. He was very furry and I had not wanted to feel around to ascertain the gender. He was non-aggressive to the other male cats in the neighborhood, so I had assumed that he was a she. Kitty greeted her with indifference until she pulled out some cat treats, at which time Kitty became somewhat more interested. Kitty's owner thanked me, stuffed Kitty in a cat carrier and that was the last that I saw of Kitty. I have walked past her house a few times, but Kitty was not out.

After a week, Kitty returned. We returned him to his owner twice more, but he continued to return and spend his day at our house. The owner, who had two other cats, realized the inevitable and offered to give us Kitty. He has been with us ever since.