The walls of the church 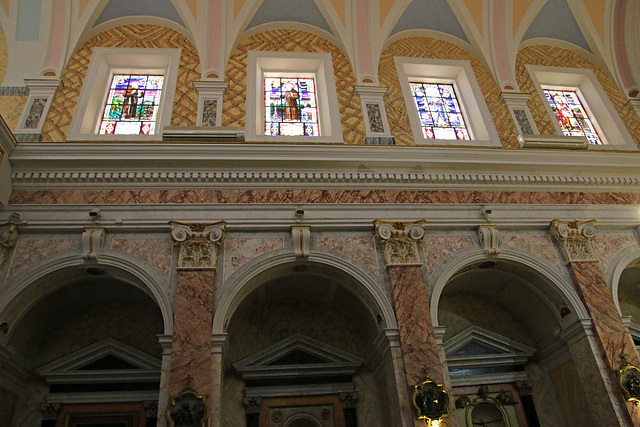 This Franciscan "The church was built in 1654 in dedication to Saint Peter over a medieval citadel that was erected by Frederick I and restored by Louis IX of France at the beginning of the second half of the thirteenth century. However, in the late eighteenth century the church was twice destroyed and consequently twice rebuilt. The current structure was built between 1888 and 1894 and most recently renovated in 1903
...
With its tall brick façade and towering bell tower, St. Peter's Church is the single largest and most distinctive building in Old Jaffa. The interior of the church is reminiscent of cathedrals in Europe, with a high vaulted ceiling, stained glass, and marble walls. The stained glass was manufactured in Munich by renowned artist Franz Xaver Zettler. The four panels in the interior of the church depict episodes from the life of St. Peter, including the miraculous catch of fishes, the giving of the keys, the transfiguration of Jesus on Mount Tabor and the washing of the feet at the Last Supper. With the exception of depictions of Tabitha, Francis of Assisi, and the Immaculate Conception, all of the other windows in the church depict Spanish saints, which is unsurprising since the present building was erected by the Spanish Empire. Also of note is the pulpit which is carved in the shape of a lifelike tree.

St. Peter's Church also contains thirteenth century remnants of St. Louis' citadel located outside and to the right of the sacristy. The remnants include two whole rooms which are circular in shape, have low ceilings and fire embrasures. It is in these rooms that Napoleon is said to have lived while he was at St. Peter's in 1799 during the French campaign in Egypt and Syria."