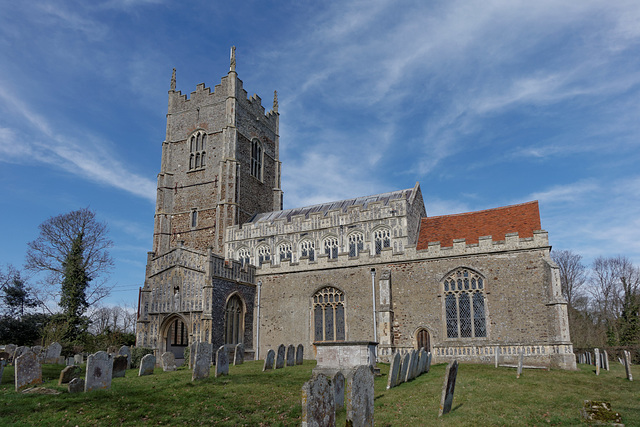 A superb Grade I listed church, sited on a rise at the heart of the village. The nave, chancel and south aisle were built in the early 14th century although the chancel was substantially restored in 1867. The tower, nave, north aisle, and porch are 15th century. The clerestory and magnificent double hammerbeam roof were added in around1500.

The tower contains a surprising amount of puddingstone, cheap and evidently plentiful locally. The south porch and clerestory however consist of very fine knapped flint flushwork - although the flint was readily available, the flushwork required specialist skills. Knapped flushwork is also present on the tower and in a frieze around the base of the chancel. The south, north and west doors, also all around 1500, have remnants of intricate carved tracery.

This church is far more elaborate than you would expect from an Essex village church, and Pevsner called it "the Cathedral of the Tendring Hundred"