Latest posted Navigate on the map Photos with specific people Most appreciated Most viewed Most commented Search by keywords Search by date
See also... Essex Walks'
favorite photos All the photos where
Essex Walks appears 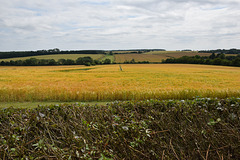 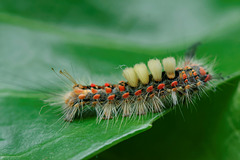 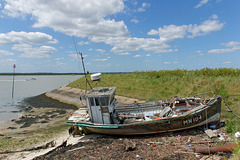 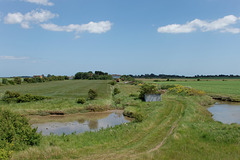 Monkton Barn in the distance. Foulness Island has a population of around 160 and is normally closed to non-residents, as it belongs to the Ministry of Defence. A School of Gunnery was established there in 1859 and since 2003 a private firm has been testing munitions under contract on the many firing ranges on the island. The island has a strange desolate and isolated feel to it, although the stilness and calm when guns are not firing, has a unique beauty even for the coastal wastelands of Essex. 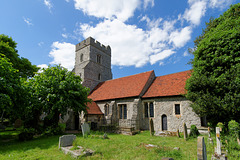 St Peter's consists of a heavily restored Norman chancel and nave, and a tower which was added in the 15th century. In 1887 church services at St Peter were performed by the Rev James Boyce, who was frequently drunk, which caused his wife to up stumps and leave him, taking her five children to Torquay for good. A local diarist wrote: " A regular scene occurred in the Church as Mr James did not make his appearance at the proper time. Waited until 20 mins past 3 and all the people left the church. When we got to as far as the school, we heard the second Bell. Turned back & went to Church and heard his farewell sermon, which was very good. He cried. He was worse for drink, but not so much so in the afternoon as the morning on account of his having such a good sleep, which accounted for his being late." Paglesham on Essex Views 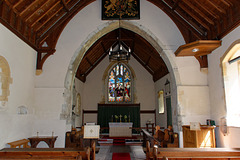 Norman nave and chancel: heavily restored in 1883 by local man Zachary Pettitt who married the daughter of an oyster merchant. 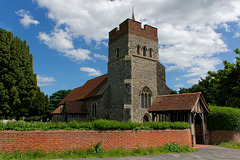 The Saxon origins of the church can be seen in the north wall of the nave and chancel, which was later partly rebuilt and extended in the 14th century. The tower was added in the 15th century, and a brick parapet added to it during the Napoleonic War. Link to Stambridge Church on Essex Views 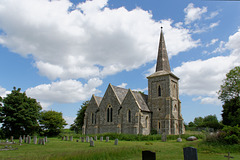 Built in 1853 by William Hambley in Early English Style, this large village ragstone church replaced an earlier one from 1550. Now closed and in poor repair. 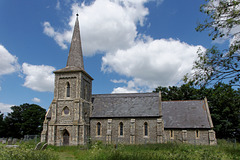 Foulness Island has a population of around 160 and is normally closed to non-residents, as it belongs to the Ministry of Defence. A School of Gunnery was established there in 1859 and since 2003 a private firm has been testing munitions under contract on the many firing ranges on the island. Like the village pub, the church is now closed. The dwindling population has no need for a church, the structure of which is now deemed unsafe: the isolated and potentially hostile environment of the island a fitting match to the ailing Victorian folly. View of Foulness Church from north 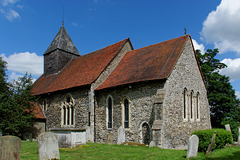 A Norman church with many interesting features including a typical 14th century Essex weather-boarded belfry on posts, and a distinctive Norman chancel arch. Sutton Church on Essex Views 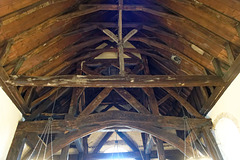 The nave looking west, showing the roof and and 4+4 post timber belfry structure. Posts along the north and south wall of the nave carry the weight via a curved brace, which provides additional support to the central four posts directly under the belfry. 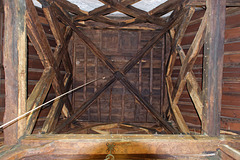 Looking up at the 14th century bell turret timbers. The four central posts are supported by trellis strutting. 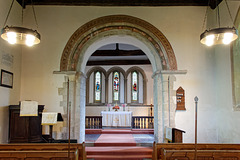 Probably the best feature of this church is the Norman chancel arch with scalloped capitals and painted roll moulding. The outer order of chevrons is a trompe l'oeil effect, as they are painted. See inset for close up.

A medieval coffin lid is used to display the brass from the demolished church at Shopland, of Thomas Stapel, 1371, in armour with sword, pointed bascinet and comail, as he would have worn at the Battle of Crecy. He was Sergeant-at-arms to King Edward III, ie one of the king's bodyguards. 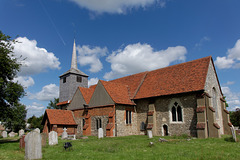 Eastwood - St Laurence and All Saints

The south aisle of the church has a distinctive 16th century brick porch with matching rendered gables alongside it. Below the gables, the upper part of the rubble walls have been rebuilt in brick. The nave is Norman, c.1100, with the south aisle and tower added in the 13th century when the chancel was rebuilt. The timber bell turret is 18th century. Eastwood Church, Essex 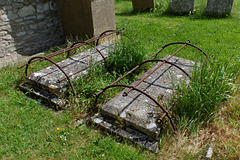 In the early 19th century, steel cages known as mortsafes were used to protect the graves from grave-robbers, so-called 'resurrectionists'. The Anatomy Act of 1832 meant that bodies could be more easily procured for medical dissection, although the stealing of corpses still continued for some years after. 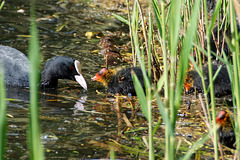 Just out of the nest, but not venturing far from the water's edge. 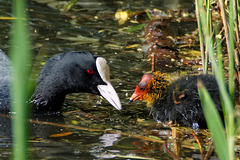