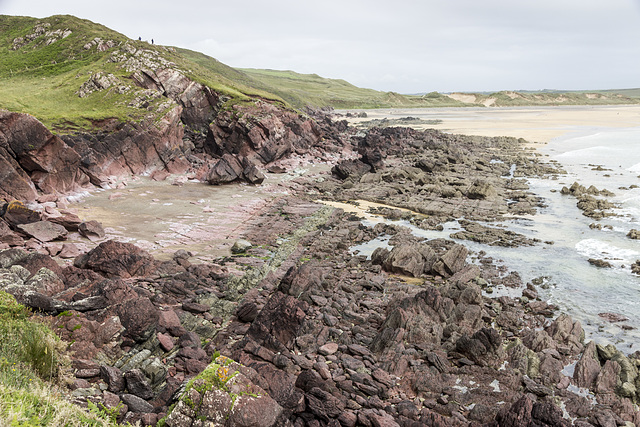 This photo was taken from coastal path and shows an easterly view of the wave cut platform in the Moor Cliffs Formation at the western end of Gravel Bay. Thin sandstone beds show up as greenish or purplish grey. The sequence is dipping to the north (left) at approx. 60° - 65°. The Blown Sand dunes of Broomhill Burrows are visible in the upper right.

Background:
The Moor Cliffs Formation overlies the Freshwater East conglomerates, seen in previous photos, and spans the boundary between the Silurian and Devonian periods. It consists of red mudstones and siltstones with occasional thin sandstone beds. These were deposited on a low-reflief floodplain at the edge of an arid continental margin, the sandstones being deposited by seasonal braided streams, the muds and silts deposited in ephemeral marginal lakes. When not inundated, the muds and silts developed carbonate-rich calcrete (caliche) soil horizons along dessication cracks, burrows and early plant root systems.

neira-Dan has particularly liked this photo