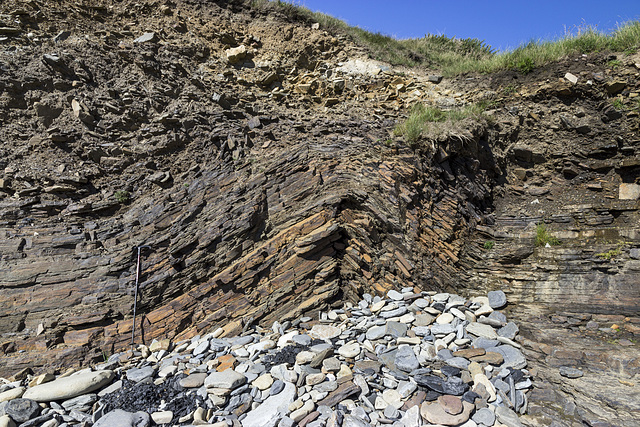 Just east of Amroth, we cross the county boundary into Carmarthenshire. The fine beach of Marros Sands, some 4 km east of Amroth is relatively isolated between Telpyn Point and Ragwen Point. There is no road access; the only way to get here is along the coastal paths, along the beach at lowest tide, or by boat.

At the western end of Marros Sands the Teague's Wood valley cuts down to the beach. The valley centre is filled with solifluction deposits ('Head') formed by freeze-thaw cycles of permafrost melting and refreezing at the end of the last glacial period (Devensian).

This is a closer view of the cryogenic anticlinal fold in the shales of the Bishopton Mudstone Formation The fold is probably due to valley bulging during melting of the permafrost. The fold is quite superficial and probably does not extend more than a few metres into the sub-surface.

Overlying the shales are angular, frost-shattered, shale fragments, possibly with some upward pointing ice-wedging structures. This is overlain in turn by a paler, angular, solifluction 'Head' and modern river alluvium, mostly sand with rounded pebbles and cobbles. See notes.