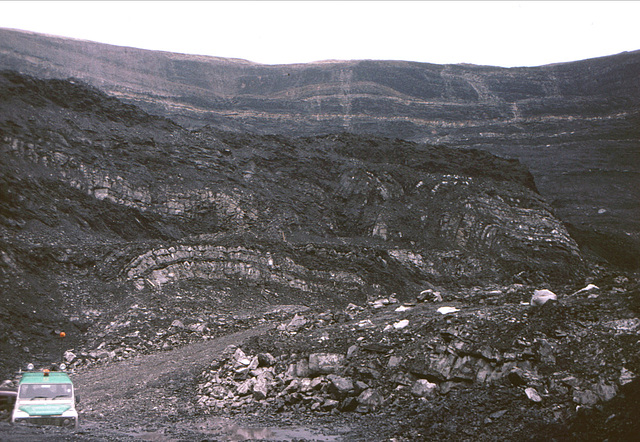 Scanned from Kodachrome 64 transparency film. Taken with a Zenit 'E' camera in March 1994. Uploaded for the Guesswhere UK Group.

This is Ffos Las opencast site near Trimsaran in the Gwendraeth Valley, Carmarthenshire (Dyfed, as it was then) in 1994. The site was huge and very deep (nearly 200m at its maximum, I think), and was of considerable geological note for its exposure of a major Hercynian thrust system (the Llannon-Trimsaran Disturbance) which caused multiple thrusts, folds, repeated sequences and incompetent deformation structures in the relatively weak Coal Measures shale/coal/seatearth sequences.

The same structural disturbances previously caused severe mining problems at deep mines nearby - notably Cynheidre, where I worked as a geologist. After Ffos Las finished production in 1997, it was restored and the site is now in the process of being developed as a major racecourse complex.