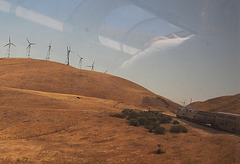 Due to track work, the Coast Starlight took an inland route going over Altamont and Tehachapi Passes, this is near the top of Altamont pass. Due to problems with taking pictures from inside the train, these pictures are poor but are posted because this was a highly unusual route.

"Primera Iglesia Bautista" (First Baptist) in Arvin, Ca. The church appears to be a re-purposed church from another denomination. Arvin is a farm town in the southern Central Valley. Like many CV farm towns, Arvin appears to have transitioned from having a diverse, English-speaking, population into being a predominantly Hispanic, Spanish-speaking population. 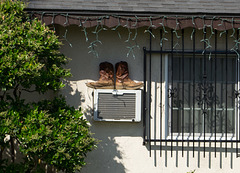 Boots, apparently put out to dry... 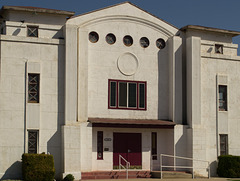 Details of "Primera Iglesia Bautista" (First Baptist) in Arvin, Ca. The details of the windows suggest a church that was once wealthier than the current church. 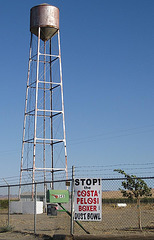 These protest signs are seen regularly across the Central Valley. They are largely in response to actions by the EPA that have reduced the flow of water to the area. Given that the sentiment is often part of an understandable "keep government off our backs" perspective, I often wonder how that perspective is reconciled with the fact that the Central Valley would be non-farmable if it weren't for the original government intervention that created the California aqueduct to bring water hundreds of miles from the Sierra to these points. Update 10/22/2014: The LA Times printed an article today describing the Westlands Water District that covers this area including the inherent problems with providing water to this side of the valley, and the use of crops that demand high levels of water: www.latimes.com/local/california/la-me-westlands-20141021-story.html#page=1

South of the town of Avenal, and just across from the state prison at Avenal, a very large solar field. It was encouraging to come across this -- the area is politically conservative and thus one doesn't expect support for new technologies. Due to the relative flatness of the area and the problems with accessing land near prisons, it was difficult to get a picture of the field -- this is taken from next to a recreational field. Per Wikipedia it was commissioned in 2011 and was, at that time, California's largest photovoltaic system. The power is sold to PG&E (http://en.wikipedia.org/wiki/Avenal_Solar_Facility) 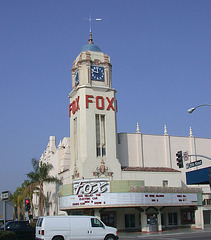 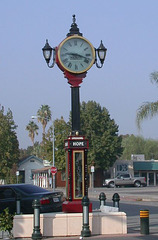 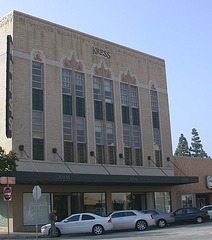 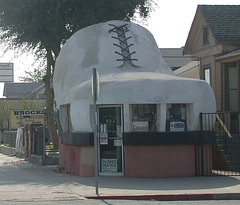 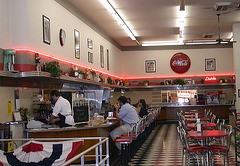 Across from the Kress's building (adjacent photo) is the old Woolworth, with the lunch-counter as it was in the 50's (Best viewed as part of California Central Valley set) 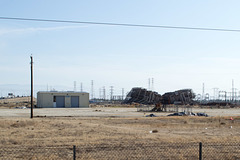 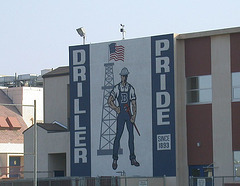 Bakersfield National Cemetery is small for a California national cemetery, but it appears to be quite new. This is one of only two areas with grave stones. 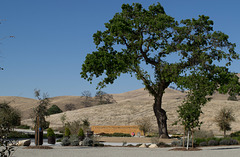 "A place of honor for those who served with honor". A memorial wall at the Bakersfield National Cemetery. Note the 'served with honor'. Many gays, who often served and fought quite honorably, were "dishonorably" or discharged with a status other than honorable when their sexual orientation became known. Per the VA website, those discharged with an other than honorably discharge are not always eligible for burial in a VA cemetery, the decision is made by the regional VA office.

Entrance to Bakersfield National Cemetery, which is fairly remote from Bakersfield in the foothills of the Sierras. In the distance if CA-58. 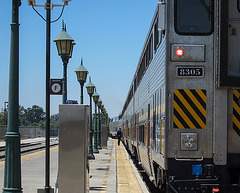 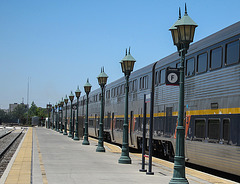 Amtrak San Joaquin train from Bakersfield to Oakland, at the Bakersfield station.
315 items in total
Jump to top