From My Collection: Topcon uni 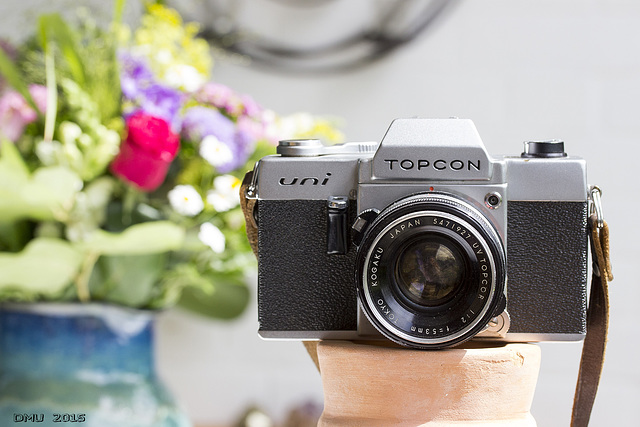 My trusty old Topcon – the first SLR I bought in 1965, when I still was a pupil, but had earned some money with some temporary jobs. I used it for roughly 20 years, and it’s still going strong. The problem is the battery for the power supply – it is, like in many cameras in those days, a PX625 mercury cell of 1.35 V, which is forbidden in Europe since a couple of years..
The Topcon uni was built from 1964 to 1973 by Japanese company Tokyo Kogaku. It was the first automatic SLR with TTL exposure measurement at maximum aperture. The shutter is a Seikosha between-the-lens shutter with 1/500 – 1 sec and B. The lens is a 1:2/53 mm UV Topcor with 6 lenses, alternatively a 1:2/50 mm HI Topcor was mounted. Apart from the focal length, I don’t know the differences. Topcon used a proprietary bayonet, and since the camera never was as popular as Nikon, Minolta or Contaflex f.e. (even though it was better from technical point of view), it was difficult to find third party lenses. Topcon itself offered 7 lenses from 28 up to 200 mm focal length.
Even though I had some whole lot of fun photographing with this camera, it suffered from mainly two things:
- The mirror made an awful noise when repulsing
- Due to the aperture adjustment ring being mounted to the camera body, and not to the lens, the max aperture had to be adjusted separately when changing the lens. This wasn’t really fail-safe. If you forgot to adjust it, it lead to wrong exposure …
For the battery problem mentioned above I found a solution I described for a Rolleiflex SL35 (currently German only). Indeed the solution for the Topcon is similar, but, due to a different battery case (see pic 4 and 5 in the linked article), not exactly the same; so I have to write another article.