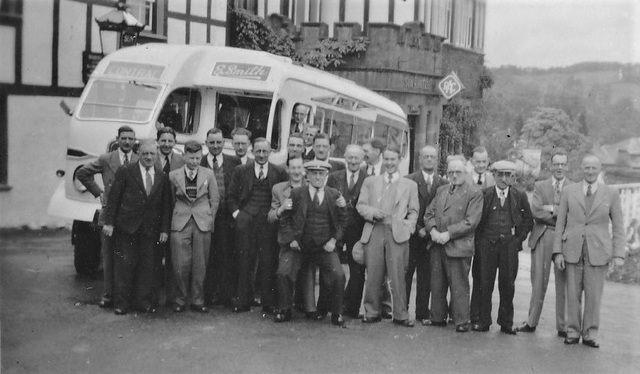 Early 1950s - Works and pub outings were once a regular part of the social event calendar in many walks of life and many of them were recorded often with their coach in the background.

This party was photographed outside the Sun Hotel in Coniston, my late Father-in-Law (Harry Chequer) is the tall handsome man stood behind the ‘seated’ man in the flat cap. Harry, born in 1924, would have been about thirty at the time. He frequented a couple of different pubs on Spotland Road in Rochdale and whilst the outing could be from one of those I am led to think this was a works outing from Thomas Robinson and Sons Limited. Robinson’s manufactured woodworking and flour milling machinery.

Now to the coach. It was operated by the well-known Rochdale coach operator Ellen Smith (Tours) Limited. Unfortunately, it cannot be identified precisely but the body moulding above the headlight possibly narrows it down to being one of the two Challenger bodied Leyland PS1/1 coaches new in 1948 registered GDK 121 and GDK 122. A photograph of GDK 121 in this form appears in the Venture Publications book on Ellen Smith written by Eric Ogden. These two coaches were re-bodied with full front Burlingham bodies in 1955 so if the coach is one of those the photograph can be dated to the 1948-1955 period. They were withdrawn from service in 1964 and I remember them quite well.

Challenger (J Crabtree) was based in Oldham and according to the fleet details in Eric Ogden’s book supplied Ellen Smith with four bodies. A photograph in the book shows the earliest (DK 8356) as having a more curvaceous frontal area so that may be discounted. However, there is no photograph of the second (DK 9092) to directly compare.

Nouchetdu38, John FitzGerald, Rosalyn Hilborne and 2 other people have particularly liked this photo

Great outing to the (then) Lancashire lake district, hope the beer enhanced the beauty of the surroundings!
10 months ago. | Permalink

I'm sure they would have enjoyed both the outing and the beer!
10 months ago. | Permalink

a good memory photo for you david with your dad-in law and a coach
10 months ago. | Permalink

A lovely old picture David. I have some of my parents and grandfather on their yearly bus outings. I hope all the coach touring companies can survive this pandemic.
10 months ago. | Permalink

An interesting slice of life from an era now receding from public memory. Great-looking coach, too.
10 months ago. | Permalink