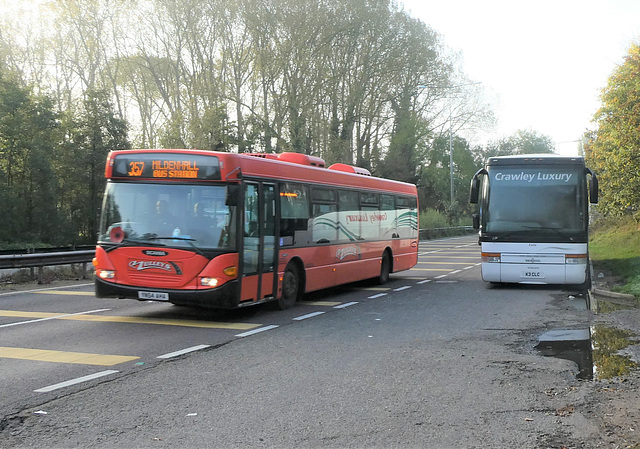 Monday 28 October 2019 (0829) – On the right poor old ‘Lulu’ had been parked in the layby at Fiveways, Barton Mills for the best part of three days having presumably suffered a mechanical problem. She is Crawley Luxury Coaches K3 CLC, a Van Hool Alizee bodied Volvo B12M new to Shearings Holidays (516) in March 2003 registered MX03 ACJ. It was a very chilly morning with the first significant frost of the autumn season.

Driving by is Mulleys Motorways YN54 AHA working the 0755 service 357 from Cavenham to Mildenhall - primarily a school related service which is also available to the general public. It is one of the Scania N94UD OmniCity buses acquired from Nottingham City Transport which was former NCT number 208 new in September 2004.
Suggested groups:
Comments