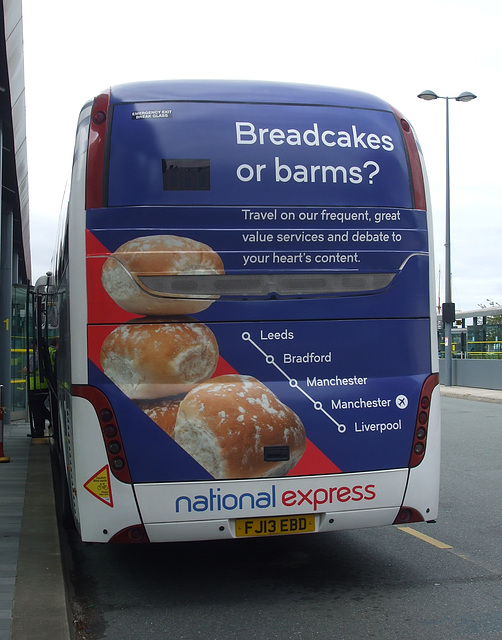 Friday 16 June 2017 (1152) – A clever take I thought this rear end advert for the Trans-Pennine Liverpool-Manchester-Leeds National Express services. My dad was a Yorkshireman and he called bread rolls ‘breadcakes’. I was brought up in Rochdale on the Lancashire side of the Pennines where they were called ‘plain teacakes’. Rochdale is only about 12 or so miles from Manchester where they called them ‘barm cakes’ – an expression gaining more universal coverage to viewers of Coronation Street etc. The advert was carried by Selwyn’s Travel 210 (FJ13 EBD), a Caetano Levante bodied Volvo B9R new in March 2013, which was seen at the Liverpool ONE bus station near the Albert Dock. I had to smile to myself the next day when I was driving back to East Anglia (where they are called ‘bread rolls’ by the way) when I overtook a National Express coach with this advert in the West Midlands. I don’t know what they call the bread rolls there.
Suggested groups:
Comments