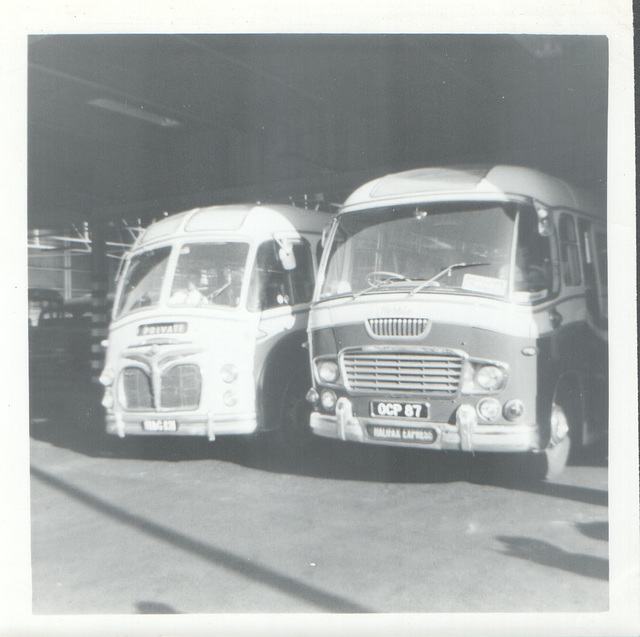 Summer 1965 or 1966 – Hebble Motor Services Limited of Halifax held road service licences for two express feeder services from Yorkshire to Rochdale to connect with the services of Yelloway and The Creams (Lancashire) Limited. One fed the Yelloway ‘Devonian’ service and the other the North Wales service of The Creams. In this picture Hebble 48 (OCP 87), a 1961 Duple bodied Ford Thames Trader, is seen at Weir Street having arrived from North Wales on its way to Halifax. Note the ‘On hire to Creams’ window label. The destination blind, set within the front bumper, reads ‘HALIFAX EXPRESS’. During my time at Yelloway it was customary for a Hebble coach to work through from Halifax to Llandudno (and return) every summer Saturday. On the left is another Duple bodied coach. The registration number looks like HAG 121 which, if this is so, it is a Commer Avenger TS3 new to Laverty Coaches of Neilston, Renfrewshire, Scotland. I am uncertain with whom it was operating, quite possibly it could be in the ownership of one of the North Wales independents that regularly came on hire to The Creams.
Suggested groups:
Comments